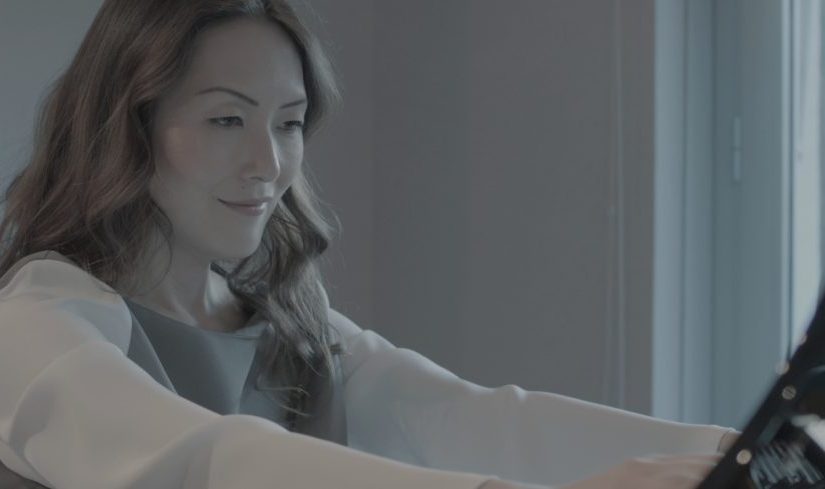 Ayako Fujiki is a Japanese classical pianist who lives in Barcelona, Spain, where she had the privilege of learning with the legendary Spanish concert pianist Alicia de Larrocha.

She has released three classical recordings, and now brings us Brightwater, a collection of her own original compositions. Already a success in Spain, Ayako now hopes to win more fans in the UK and beyond.

According to the press release:

“Contributing to the established chronicle of musicians and composers taking inspiration from nature, Brightwater offers Ayako’s reflections on landscapes, forests, rippling water and broken stones. Capturing the beauty of eroded nature, Ayako translates the slow but persistent effect of the natural elements on rocks and trees.”

The album comprises 13 pieces, of which 9 are piano only (some including overdubs). For the final four pieces, Ayako is joined by Cristian Chivu on violin and Cristoforo Pestalozzi on cello, although their parts – gorgeously played – are incidental.

Ayako’s compositions are in my opinion excellent. She has a genuine gift for melody, evident from this opening title track:

Ayako’s pieces develop with a strong sense of structure and narrative. Her style reminds me in particular of Japanese composer Ryuichi Sakamoto, renowned for film scores such as those he composed for Merry Christmas Mr. Lawrence, The Last Emperor and others, and whose solo piano album is a particular favourite of mine.

Akayo mixes cultural influences from Japan to the Mediterranean, with frequent echoes of the Spanish piano school, Granados in particular. She cites “Romantic, World, Minimal, Electronic and even Japanese Contemporary Epic music” as influences, and it’s fair to say that I can hear all of those in her pieces. This is not to say that they lack distinction however – these are fine and enjoyable compositions, which add up to a characterful album.

Ayako’s piano playing is remarkable – virtuosic, warm and lyrical by turn. Her classical training is obvious and perhaps most explicit in Weathered Pebble, which borrows the left hand figuration of Chopin’s Revolutionary Etude.

According to the packaging, the piano featured on this recording is a Steinway Model D grand, but I rather feel that the character of the venerable instrument has been somewhat lost in the mastering process. It sounds close mic’d and quite heavily compressed in the manner of contemporary pop recordings, leaving the overall dynamic range somewhat squashed.

It’s ideal for radio play, or on a car stereo, but personally I think that a wider dynamic range would have provided more space for the music to breathe.

Even so, the album can still easily be enjoyed as background music, as I have been doing on repeat since the review copy arrived!

Ayako Fujiki is clearly an imaginative and prodigious musician with an exciting artistic vision, and at its best Brightwater is intoxicating. Given the right support I feel she has genuine potential to develop into an outstanding and very successful artist in the next few years.

I really enjoyed Brightwater and certainly encourage all readers to have a listen!

Brightwater is available now from iTunes and Amazon worldwide.