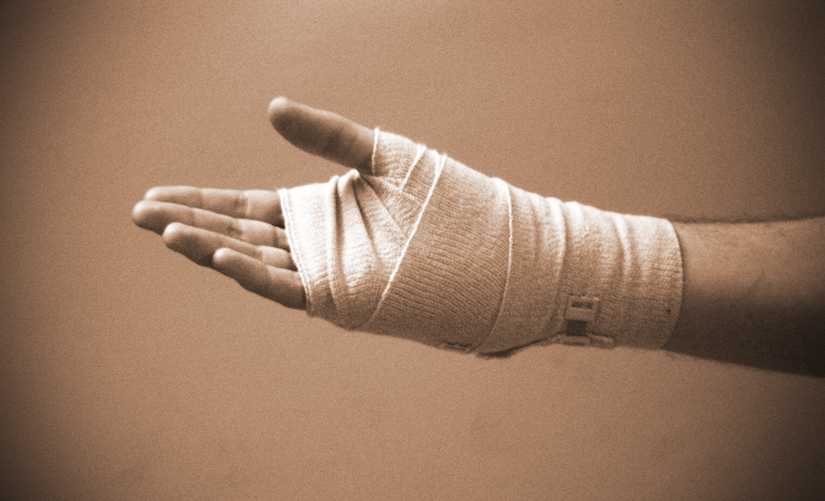 PATHWAYS FOR LIVING • by ANDREW EALES
Setting our piano journey in its living context.

Unless you lived in a humidified bubble, away from sharp objects and potential harmful items, injuries are part of life.

The response to my invitation for stories and anecdotes regarding incidents that may have curtailed your piano playing or ended your musical career altogether was overwhelming. As I was therefore unable to squeeze the material into one blog, I’ve been compelled to write a second part to You Can’t Stop the Music.

Just to reiterate, the injuries were not necessarily musically acquired, but things as simple as falling off a bike, crushing fingers between two bricks or hurting your back slipping down a flight of stairs.

Amazingly, after writing the first article, I found out my mum has some nerve problems in her fingers.

She told me that as children, her siblings would melt wax on their fingertips and when cooled to dry, play the piano as a fun alternative to the standard method! This was the way she described how playing the piano keyboard now felt. It hasn’t stopped her from performing but it’s certainly put a spanner in the works of eliciting dynamics and feeling to her performances.

One of my respondents was Marie McKavanagh. Who amazingly, is both a concert pianist and a doctor for 28 years.

One little mistake on a road kerb late at night caused a fall, fractured wrist and a metal plate needing to be inserted. Even after one year, periods of long playing are still a “no go zone”. Marie has used extensive hand therapy and re-educating other muscle groups in her hand to take over. Because the wrist lost some rotation, keeping it flexible and soft requires hard work.

But despite all the obstacles, Marie knew she wanted to get back to playing her beloved Bach and Chopin

Stephen Marquiss was also an enthusiastic respondent to the first article.

Stephen had a background as a child prodigy in a specialist music school and entered many international competitions. Unfortunately by 18 years of age, he had deteriorated to the extent he could barely play grade 2 pieces. Stephen believed his steady downward spiral, including trouble with his right arm, was due to his overall posture and mental health. He actually credited the rebirth in his 30’s to his Piano Portals teaching method.

Due to the holistic approach of his new lessons, Stephen has made a full recovery and feels he has exceeded his own expectations

Bruno Sanfilippo related a lovely story that spanned his whole life. He was born into a home that had an upright piano and as Bruno puts it “during my childhood years I was never far from it, in fact it was my first and favourite toy”.

During his teenage years, he unfortunately lost the tip of one of his left fingers in an accident playing with a door. This seemed to spell the end for his piano playing future. Several years passed and even though the ring finger was shorter, it still had all the nerves and feeling in it. Bruno once again began his close relationship with the piano through study and lessons. His teacher told him that “Aleksandr Skriabin had short fingers and played wonderful piano, so Bruno, you don’t need to worry!”

Through perseverance and tenacity, Bruno finished his studies at the music conservatory and the left hand ring finger is now just part of the ten options available to him when playing the piano.

Ivan Ceja had trouble with his left hand, which caused him to give up the piano for over 3 years.

A chance meeting with a guitarist, who had trouble in his right hand, led to Ivan being coaxed to get back into music. “You’re going to be a musician, and artist, always! Therefore, if you can just play with one hand, play and make music”, was the advice Ivan received. Not only the words, but the actions of the guitarist, propelled Ivan back into music.

Unfortunately, due to scoliosis, back pain has shortened playing times, but through exercise, meditation and regular chiropractor visits, Ivan is able to manage his pain. He tries to see a silver lining on his personal dark cloud. Before the pain became his “thorn in the side”, Ivan was always striving for perfection and was extremely hard on himself. He believes his ego was too big! Now his main aim is to enjoy music and share it.

Ivan has made peace with his disability and the wonderful side effect is humility and a generous nature where his musical gifts are concerned.

Ian Ring shared how he was brought back to life by CPR and a defibrillator. After spending time in a coma, Ian lost some memories and then that horrible time of not knowing if you will retain all your faculties.

But apart from the stay in hospital providing medical care, it also gave him a healing outlet through the ward chapel piano. Even though missing big chunks of memory, pieces like Chopin Preludes & jazz standards came back as easily as riding a bike.

Next time an ambulance is taking you to a hospital, ask for the one with the piano, it could save your life!

Emanuele Dentoni shared the heartbreaking story of Keith Emerson. Nerve damage to his fingers caused a gradual loss of his once lightning fast playing ability.

On tours he now required a second keyboard player to perform the more challenging sections of his repertoire. This caused a flurry of comments online, berating his talent and telling him to give up touring.

As you can imagine, sensitive, artistic musicians are incredibly susceptible to bullying like this, and he unfortunately took the internet opinions of a few too hard. This led to a huge drop in confidence in the lead up to a solo piano tour of Japan. His once positive outlook towards performing live was shattered. Keith Emerson succumbed  to his debilitating depression and tragically committed suicide in March 2016.

Paul Wittgenstein‘s use of only a left-hand was another story Emanuel alerted me to.

During the first world war, Paul’s right arm was amputated. He devised novel techniques, including pedal and hand movement combinations that allowed him to play chords previously regarded as impossible for a five finger pianist. Wittgenstein approached many famous composers and commissioned them to write material for him to perform.

This is the reason there are much more pieces specifically composed for the left-hand, 1000 at last count. Fascinating but true!

The one thing that seems to unify all these stories, is our brain.

When bad news of an injury or a diagnosis from a physician is received, almost all respondents quit music. As time went on, their brains protested and wanted to “get back on the horse”, so to speak.

This started a process of tenacity and persistence, despite the odds. If there was enough of a musical passion before the impediment to playing, then the desire in their brain took over and in many cases produced a miracle. Unfortunately, the converse can also create a negative spiral, as in the tragic case of Keith Emerson.

Advising fellow musicians in these “glass half empty” stages, to just “get their head in the game”, is both glib and patronising.

Everyone’s responses to injury and medical bad news is widely different, but as mentioned in the previous blog, strong supportive friendships can bring the best out of those struggling. Professional advice is a must in these situations though, as empathy and sharing with the musicians can only go so far.

Injury need not be the end of any musicians career.

Take Leon Fleisher for instance. At 16, he was “the pianistic find of the century”, going on to play for two sparkling decades before his right hand seized up.

Leon had cut his thumb on a piece of outdoor furniture and things went downhill from there. While this forced him into other aspects of music, like conducting and teaching, he still longed to return to the stage. After a gap of 40 years and Botox injections every 6 months, Fleischer is now back performing with gusto.

We all have a responsibility towards the mantra “you can’t stop the music”.

If we are teachers, parents, friends or relatives, now is the time to seek out those we can actively encourage to restart their musical aspirations after an injury or debilitating illness. Sometimes depressed moods can be turned around by constant, genuine support of a loved one.

If you have succumbed to a prognosis of never playing again, challenge it, or find other compartments within the description of musician. Music enriches not only us, the musician, but all those listening as well.

Human beings have an almost infinite resourcefulness available to them. If you’ve given up music, keep trying, as so many of the inspiring letters I received testified.

And if you notice those around you falling down a mine shaft, come alongside them and rig up climbing gear to get them out of the hole they’re in.