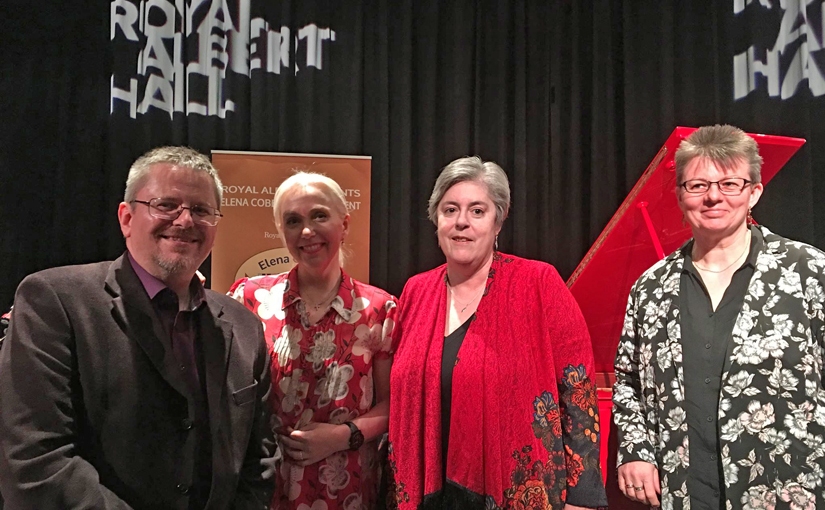 We often hear of a decline in music education within UK state schools – and without doubt, over the last 25 years of teaching I have witnessed a steady but undeniable diminuendo in the musical life of local schools here, often despite best intentions.

How wonderful, then, to see buoyant evidence of enthusiasm for music among young people – as was most certainly and robustly the case when I attended the Elena Cobb Star Prize Event at the Elgar Room in London’s prestigious Royal Albert Hall last week.

Here was a showcase of great playing delivered by young people from around the UK and beyond, each performing and clearly relishing music by a host of living writers, and in many cases in the very presence of those composers.

Introducing the event, organiser Elena Cobb wrote in the programme,

“Memories of your performance at the Elena Cobb Star Prize Event on the world-famous stage will stay with you forever. It will build your confidence, character and self-esteem, and one day when you are older, you will be telling your own children: ‘when I was your age, I played the piano at the Royal Albert Hall’.”

Her announcement that the bright red grand piano gracing the stage formerly belonged to Sir Elton John was met with gasps from the audience, underlining the point that we all have musical heroes, and that the UK has no shortage of them.

The Event itself comprised two concerts – each roughly an hour long, and separated by a short interval – followed by a masterclass.

The first concert was billed as The Winners Concert and featured students who had performed in the festivals and competitions over the last few years where the Elena Cobb Star Prize has been featured (British and International Federation of Festivals) and in international competitions where students had chosen to perform music published by EVC Music.

The Showcase Recital which followed was (and I am told will remain) non-competitive, in which students are invited to perform music published by EVC Music and some other leading publishers.

This year in addition to the EVC repertoire, the programme featured a premiere of the Idaho Suite by Christopher Norton, released by the composer, Message from Mars by Peter Gritton (from ABRSM’s brilliant Piano Star Grade 1 collection) and the highly evocative The Week of Birthdays by Richard Rodney Bennett (Alfred Music).

Both concerts featured young performers from across the UK playing alongside their peers from Gibraltar, Germany, Austria, Columbia, Slovenia, Israel, South Korea and the USA. It was a genuine delight to see these musicians sharing in their love of contemporary piano works.

Elena has subsequently compiled this YouTube video of highlights from the event:

As well as the composers shown in the photo above, others present included Donald Thomson, whose three gorgeously presented books of Celtic pieces were recently nominated for an Award at the Music Expo, and Andrew Higgins; several pieces from the latter’s Birds- Études-Tableaux collection were performed, and hearing them live only increased my enthusiasm for these brilliant and imaginative compositions (you can read my detailed review here).

The concert also included many of Elena Cobb’s own compositions, several of which I had not previously encountered. These pieces were, for me, among the highlights, not least because they seemed to particularly inspire expressive performances from the young players taking part.

It must also be noted that as host for the event, Elena displayed a catchy enthusiasm, emotional engagement, and a passion for music education that was genuinely inspiring. To have organised such an exciting event, too, is a considerable achievement.

The Elena Cobb Star Prize Event will undoubtedly be remembered as a landmark in the lives of all who took part, just as Elena has predicted.

At a time when good news can seem rather thin on the ground, this is exactly the sort of event that as musicians and educators we should be applauding and seeking to emulate.

Of course most of us can’t hire such a prestigious venue or enlist the partnership of sponsors – in this case ABRSM, Alfred Music, and the BIFF – but there is much here that teachers can allow to percolate into our own practices, and not least the considerable enthusiasm and positive vibe that Elena imbues all her work with.

And this wasn’t just a one-off; the next Elena Cobb Star Prize Event is already scheduled to take place, once again in the Elgar Room at the Royal Albert Hall, on 4th April 2019.

If you have a chance to attend, be there! Very highly recommended!

One thought on “EVC @ the RAH”