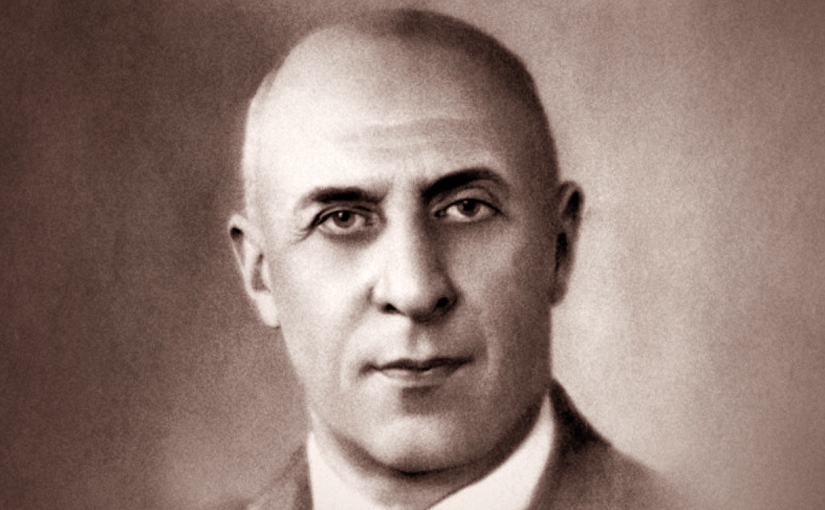 The name Vsevolod Petrovich Zaderatsky (1891-1953) may be a new one to most readers; if so it is perhaps because the authorities of the Soviet Era condemned this extraordinary composer to be “deliberately forgotten”.

But with the first edition of his 24 Preludes and Fugues (1937-9) – which were composed while Zaderatsky was a prisoner in the dreaded Kolyma forced-labour camp – newly published worldwide, his fortunes may be posthumously about to change…

Vsevolod Petrovich Zaderatsky was born in December 1891 in the town of Rovno in the Ukraine, his father a prominent railway engineer, his mother a descendent from an impoverished branch of the Polish aristocracy. Moving to Kursk during his childhood, young Vsevolod began his musical studies there, before entering the Moscow Conservatoire, where his teachers included Pachulski, Taneyev and Ippolitov-Ivanov.

Fatefully, in 1915 while still a student, Zaderatsky accepted an invitation to be one of the musical instructors to the heir to the imperial throne, Tsarevich Aleksey – a connection which would soon lead to a lifetime of suspicion. After serving in the War, he fought as a volunteer in the White Army, sealing his subsequent fate.

After being captured in 1920, his family fled to France, and he never saw his first wife or son again. His life was spared, but he was stripped of basic civil liberties and exiled to the provincial town of Ryazan. There he was repeatedly persecuted by the authorities, and arrested in 1921, 1922 and 1926. All of his music manuscripts were destroyed.

In 1930 he was allowed to move to Moscow, where he joined the Association for Contemporary Music (ACM). So began a more fruitful period of composing – his first music from this period being freely atonal in character, although as the decade progressed so his music returned to a tonal focus.

But once again his creative freedom was short-lived. In 1932 the ACM was dissolved, and in 1934 Zaderatsky was sent to Yaroslavl’ – where he came under renewed persecution from the state authorities.

Zaderatsky’s subsequent arrest in 1937 following staged denunciations by jealous musician colleagues led to him being sent to Magadan Province, to the Kolyma camps, considered some of the most terrible hard labour camps in the whole of the GULAG system. It was here, remarkably, that he composed his 24 Preludes and Fugues (1937-9).

After his release from Kolyma in 1939, on the petitioning of his second wife, Zaderatsky spent another decade in exile, away from the cultural centres where he might have thrived, before finally being allowed to settle in L’vov in 1949, where he spent his final years.

Throughout his lifetime, Zaderatsky was blacklisted as a composer, so that his works couldn’t be published. It was only a quarter of a century after his death that the first editions of his music began to emerge from the darkness, and only today that his music is truly beginning to come to light.

Zaderatsky’s son, Vsevolod Zaderatsky Jr, suggests in his outstanding and very detailed Preface to this first edition of the 24 Preludes and Fugues,

“In the entire history of art there is nothing equivalent to the circumstances under which this monumental set of 24 Preludes and Fugues for piano was written. The creation of such a work in a forced-labour concentration-camp is a phenomenon unique of its kind even in Russian history which abounds in acts of inner resistance…”

It is impossible to imagine or piece together Zaderatsky’s life in the camp, but it is clear he quickly came to enjoy a special status, spared labour on the scale of his less fortunate companions. His son again recounts:

“We can marvel once more at the resourcefulness of mind needed to bring about ‘preferential treatment’ for oneself and protect one’s talent from being slaughtered, to seize the right to creative work (to Zaderatsky that was equivalent to the right to life!) He convinced the overseers that he would write only musical symbols, not words…”

And so it was that the 24 Preludes and Fugues came into being over the course of the composer’s two years of incarceration.

The composer’s hand-written copy (he even needed to draw the manuscript lines) is the sole source of this monumental composition, now edited by his son for the Zaderatsky Foundation Moscow.

Along with Zaderatsky’s other piano works, the 24 Preludes and Fugues have also recently been recorded in a five disc set by pianist Jascha Mentsov, released on Hänssler Classics and available on Apple Music and Spotify.

Zaderatsky’s mastery of form and counterpoint are never in doubt throughout this set, and it is indeed extraordinary that he wrote music of such power in such brutal circumstances, and without recourse to even trying out these pieces on the piano at any point.

Although easier pieces from the collection might be possible to the Grade 8 pianist, these are fundamentally diploma level, professional recital works. Zaderatsky’s technical brilliance as a composer, one must assume, was matched by a phenomonal mastery of the piano as a performer, given the ferocious yet seemingly instinctive physical demands made on the player.

If they are difficult to play, nor are they always very easy to listen to. Intellectually dense and often starkly modernist, but without doubt an extraordinary and important addition to the repertoire.

As one would fully expect, the pieces are characterised by defiance – the predominant outbursts of anger, despair and resignation only occasionally giving way to hope or levity – the unfulfilled glimpse of a tierce de picardie at the close of the G sharp minor Prelude being a moving example, not least because of the agonising conclusion to the Fugue which follows.

One of the lovely contrasts within the set is surely the B major Prelude and Fugue; here the delightful and gentle filigree passagework of the airy Prelude gives way to a Fugue whose mood gradually shifts heavenwards, leading to an astonishing and euphoric climax.

The most inevitable comparison for Zaderatsky’s 24 Preludes and Fugues will be the similar set composed by Shostakovich just over a decade later in 1950/51.

Based purely on their respective sets of Preludes and Fugues, I would conclude that Shostakovich’s pieces show greater variety of mood, humour, and reveal a more engaging melodic gift. Conversely, Zaderatsky’s pieces score highly in terms of bravura pianism, drama and a more taut approach to both compositional structure and counterpoint.

Lovers of the one will surely appreciate the other!

This is the first volume in a new edition of Zaderatsky’s complete piano works, to be published by Russian Music Publishing and distributed worldwide by Schott Music. Further projected volumes will include the 6 Sonatas, various programmatic cycles, 24 Preludes, transcriptions and Children’s Concertos.

As with the Rachmaninoff urtext editions I recently reviewed from the same publishers, this is a stunning publication.

The lengthy Preface includes an extended biographical sketch by the composer’s son, a detailed analysis of each and every Prelude and Fugue, and 24 pages of photographs of the original manuscripts – which of course have particular interest given the work’s provenance.

The music edition, by the composer’s son, is again beautifully presented, the thick cream paper containing excellently engraved and well-spaced notation. There are no suggested fingerings however. More surprisingly, there are very few dynamic markings, leaving much to the performer to determine in its musical context.

Zaderatsky seems beyond doubt to have been one of the more considerable musical geniuses of the first half of the Twentieth Century, and it is heartening that now at last the extent of his talent is coming to our attention.

I am sure I am not alone in looking forward to the further projected volumes in this series, and it will be very interesting indeed to see whether today’s performers fall under the considerable spell cast by Zaderatsky’s music.

I very much hope so, and warmly commend this edition of the 24 Preludes and Fugues.

For more information and to purchase, visit the Schott Music London website.