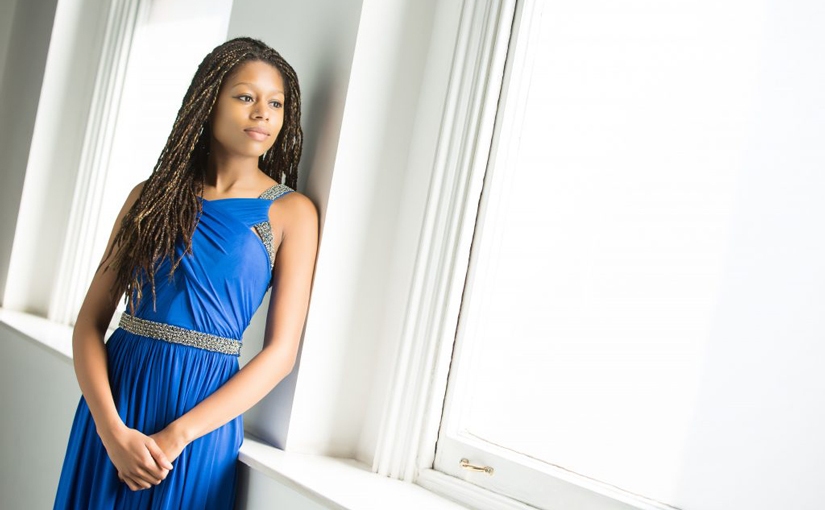 2019 marks the bicentenary of the birth of Clara Schumann, who wan born on 13th September 1819. Right on cue, this new recording from Decca offers the perfect introduction to her music, as well as marking the solo recording debut of rising star Isata Kanneh-Mason…

Before focussing on the composer, the music and its performance here, a few words to introduce Isata Kanneh-Mason.

One of seven hugely-talented siblings that make up the irrepressible Kanneh-Mason family (younger brother Sheku is something of a household name, and a Decca label mate), Isata has performed around the UK and abroad, with concerto appearances, in solo recitals and in chamber ensembles.

She held the prestigious Elton John Scholarship for her Undergraduate studies at The Royal Academy of Music in London, performing with Sir Elton John in Los Angeles in 2013. The following year, she took part in the Piano Category Final of the BBC Young Musician of the Year.

Kanneh-Mason is currently a Postgraduate at The Royal Academy, where she studies with Carole Presland, having been awarded the Gwendolyn Reiche Memorial Scholarship.

Clara Schumann was without any doubt one of the greatest musicians of the nineteenth century, celebrated across Europe as a concert pianist, teacher and writer.

Born Clara Wieck in Leipzig in 1819, she lived a life that was filled with difficulty. While still very young, she was separated from her mother following the breakdown in her parents’ marriage; as was then customary her father had sole custody.

Friedrich Wieck proved to be an overbearing parent, if an able piano teacher; under her father’s tutorage, Clara’s prodigious talent blossomed, and she was soon touring Europe as a concert pianist.

Friedrich’s reputation as a teacher was also spreading; by the time Clara was 11 years old he had taken on a new student, Robert Schumann, then aged 20, who had also begun to lodge in the Wieck family home.

The story of how the bond grew between Robert and Clara, despite the vehement opposition of Friedrich, is the stuff of musical legend. From the start, Schumann was clearly infatuated with the young Clara. As early as 1832, when he was 22 and she 13, he wrote a note to her saying:

“I often think of you, not as a brother thinks of a sister, nor as a boyfriend thinks of a girlfriend, but as a pilgrim before a distant shrine.”

There can be no doubt that Clara’s musical genius was the initial source of Robert’s devotion; right from the start he was inspired by her artistry, and it was he as much as Friedrich who encouraged the young prodigy to develop her own compositional voice. Indeed, as their early friendship became more intimate, each peppered their compositions with cyphers, quotations and references to each other.

By the time they finally married in 1840, Robert was struggling to make a name for himself as a writer and composer, while Clara was the celebrated concert artist who served as the family’s main bread-winner.

Their shared life continued to present many challenges; financial stability was elusive, Robert’s mental health deteriorated over several years, and Clara was ultimately left to bring up their seven surviving children (little Emil having died at the age of just one in 1847).

After Robert’s incarceration in a mental hospital in 1854 (after which Clara never again saw him) and death in 1856, she devoted herself to performing, teaching, and bringing up her family. Her dedication to preserving Robert’s extraordinary musical legacy turned into her own lasting memento, many remembering her as “Mrs. Schumann”.

After Robert’s death Clara composed very little of her own music, but she remained a central and much respected figure in European musical life until her death aged 76 in 1896.

“What I love about Clara’s music is its palpable sense of sadness and melancholy, right from her early works. You can hear that she experienced great sadness in her life…

“Her music reminds me of Chopin and Mendelssohn, but at the same time she has a strong compositional voice that sounds like no one else. You can tell from it what a romantic person she was, but also how strong she was. These are two defining strands of her character.”

In what is perhaps the most perfect compilation of pieces showcasing these two opposing and complementary facets of Clara’s musical personality, Kanneh-Mason selects a programme that includes an enticing mixture of piano solo and collaborative works:

The Piano Concerto in A minor

Clara began work on her Piano Concerto in A minor when she was just 13, enlisting Robert to help orchestrate the ravishing Finale. Though the work invites comparison with Robert’s later Piano Concerto in A minor (such a beloved work, but not composed until a decade later), it actually bears more similarity to the concerti of Chopin and Mendelssohn; after repeated listens to Kanneh-Mason’s persuasive account here I am tempted to hail it as their equal.

Cast in three movements, the first is fairly conventional in its form and includes memorable themes, while the second (as expected, the slow movement) is deeply lyrical, and notably includes a gorgeous cello solo (perhaps the inspiration for Brahms’s Second Concerto?). The virtuosic third movement brings the concerto to a joyous and playful conclusion.

Kanneh-Mason is joined by the Royal Liverpool Philharmonic Orchestra conducted by Holly Mathieson, and it’s clearly evident that they enjoyed a closely sympathetic and rewarding partnership; the interplay between soloist and orchestra adds considerably to the impact of this vivacious work.

The most substantial solo work here is the fabulous Piano Sonata in G minor, a composition which Clara seems to have had a surprising lack of faith in. Composed during the early years of her marriage, it seems that Robert advised against publishing it (a compliment she famously returned by suppressing his Ghost Variations and Violin Concerto).

The Sonata comprises four distinct movements, rather conventionally marked Allegro – Adagio – Scherzo – Rondo. All are in my view excellent (sorry, Robert), but only the Scherzo saw the light of day in Clara’s lifetime, published as an individual work. The work as a whole was only published in the 1990’s; as such it counts as a glorious rediscovery, and one which surely now deserves a central place in the Sonata repertoire.

Elsewhere on this recording, Kanneh-Mason delights in the 3 Romances op.11, which are characterful miniatures of the highest order. Clara’s transcriptions of two of her husband’s most cherished lieder are also included, while the Scherzo No.2 in C minor is probably the best known of Clara’s solo recital compositions, and a welcome highlight of this disc.

Having identified romance and strength as the dual characteristics of Clara’s compositional style and personality, Kanneh-Mason proves a more than fitting interpreter of this music, combining a muscular approach with moments of delicious tenderness.

Seemingly unfazed by the technical challenges, Kanneh-Mason breathes life into each and every phrase of this music, allowing it to take centre stage.

A further interlude is proved by the frequently-recorded 3 Romances fo violin and piano op.22, for which Isata is joined by soloist Elena Urioste. Here, Kanneh-Mason proves an alert accompanist and enthusiastic duo partner; in her range of colour and attention to detail she perhaps outshines Urioste here, particularly in the second Romance.

Recorded in Saffron Walden Concert Hall and The Friary, Liverpool between February and April 2019, the sound here has admirable clarity throughout, although perhaps lacks air and depth at times. Overall, this is a recording which conveys the intimacy and vitality of the performance very well.

Decca’s impeccable and eye-catching packaging places the emphasis on artist rather then composer, with a cover image and numerous colour photographs of Kanneh-Mason included within the generous 20-page CD booklet, which also includes an interview between the pianist and Clara Schumann expert and writer Jessica Duchen.

Kanneh-Mason has not simply made a strong case for the music of Clara Schumann here; she has in the process created a wonderful album.

In short, if you are looking for an appealing and compelling introduction to the work of this somewhat neglected but important composer, you will be hard-pressed to find a better one elsewhere.

And as a recording debut, this release is impressive indeed; after so thrilling an introduction, I can’t wait to hear what Kanneh-Mason does next.

To conclude, Romance is without doubt one of the most important releases so far in 2019, and a must-have for any serious lover of classical piano music.

Readers wishing to explore more of Clara Schumann’s output are recommended her exquisite Piano Trio, wonderfully conveyed in this recording.

RECENT RECORDINGS OF THE MONTH:

All products featured on Pianodao are independently selected by Andrew Eales. However, when you buy something through the site’s retail links, Pianodao may earn an affiliate commission, but without it affecting the price you pay.

The PIANODAO website features 500+ FREE articles and reviews.
The blog exists thanks to generous DONATIONS from readers like you.
For extra support and music discounts, join the TEA ROOM COMMUNITY.