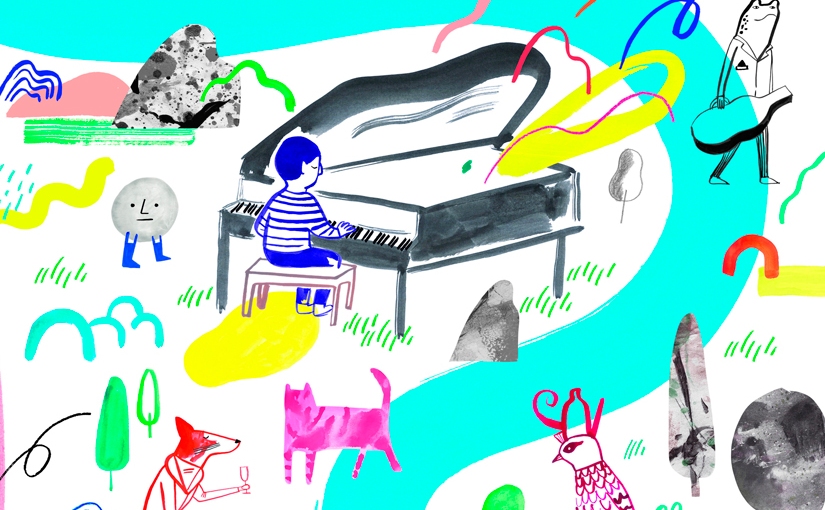 Composer James Welburn (whose Musical Escapades collection I reviewed here, and his Reflections in Waltz right here) continues to impress with his latest publication.

Written “for the aspiring virtuoso”, this new addition to Welburn’s catalogue is alliteratively titled Adventures & Accolades. Comprising 14 short pieces, the collection is once again brought to us by the ever-brilliant Editions Musica Ferrum, while the recordings of the pieces are available on the composer’s website, or here:

In common with Welburn’s previous two publications, the music is suitable for intermediate players, although the pieces here are shorter than in his earlier collections, and have a wider variety of style, tending perceptibly towards the more jazzy.

To find out more, read on…

“My passion for composing fun and engaging music is at the heart of Adventures & Accolades, a collection of piano pieces for the budding virtuoso, and one that I hope will offer its players enjoyment, inspiration and a challenge.”

So writes Welburn about this new collection, which includes within its pages the following 14 titles:

The cracking swing of Hopscotch Frog gets the collection off to a fine start, a 16-bar jaunt suitable for late elementary players (it would make a great Grade 2 piece were it not for the challenge of the slightly awkward chord shape changes).

The lyrical 6/8 lilt of Magician’s Theme immediately alerts us to the variety that will follow. From the pop-ballad tenderness of Rafa’s Lullaby and Aubergine in D to the neo-classical Horseback Minuet and Royal Anthem, each piece here paints a fresh and engaging mood picture, Welburn’s obvious gift for melody underpinning and bringing a unity of quality to the collection.

The delightfully sentimental Serenata Toscana, with its echoes of Nina Rota, is the longest piece in the collection at three pages, while most pieces are printed across two facing pages, and some just one.

Among these we find the characterful Footsteps of the Pharaoh, which the composer tells us he wrote when he was himself an eleven-year-old child. Welburn will hopefully understand the compliment when I say that, while tremendous fun, the piece isn’t the best here! But as happenstance would have it, I think that eleven is probably the ideal target age for these brilliant and enjoyable pieces.

For me, the best and most unexpected highlights include the three jazzier pieces: the aforementioned Hopscotch Frog, Groovin’ Grasshopper and Cool Cat Blues. The latter may already be known to you, as Musica Ferrum generously shared it as an exclusive Pianodao promotional free download here.

The book appears in the standard (and lovely) Musica Ferrum house style, with buff covers and cream pages within, and carefully engraved music notation. From the start, Musica Ferrum scores have always in my view oozed class, and continue to do so.

Inside, there’s the QR code which takes you to Welburn’s website, where you can listen to his recordings of the pieces. Or come back here to listen of course! The Contents page is followed by not one but two introductory forewords, the first entitled Hello piano player! and the second Hello teacher!

“I love composing music because it helps me to express different emotions and to write my own stories…
Have you ever composed your own music? I’d love to encourage you to explore the magic of creating your own music and see where the journey takes you!”

Having explained to players that some of the pieces were written when he was himself a child and teenager, Welburn similarly encourages teachers, saying

“It is composition itself that occupies a central place within this book; I wrote some of the pieces when I was growing up, early on in my own journey as a composer. Their inclusion, I hope, will inspire young pianists to give composition a go themselves.”

I hope so too, and must commend Welburn for his gentle encouragements. The sense that accessible creativity, and the thought that musical ownership is for all, certainly elevates this book above any number of more pompous or less inviting alternatives. We definitely need this lightness of spirit.

On balance, I like this the best of Welburn’s scores to date, and it’s the one I can most easily see myself sending students off to purchase.

Welburn is clearly a rising star in the world of educational composition, but the particularly winning touch here is the combination of variety, imagination, and consistency. Bearing in mind he works with ABRSM, I can’t understand why they’ve not snapped him up, but kudos to Musica Ferrum for doing so. I suspect he will quickly become one of their most popular successes.

Above all, I think this music really is: fun. These pieces are really enjoyable, so it seems obvious to me that Welburn has admirably succeeded in his stated aims! Brilliant!

PIANODAO is free to access and ad-free thanks to
generous DONATIONS from readers like you.
Supporters are welcome to join THE TEA ROOM.