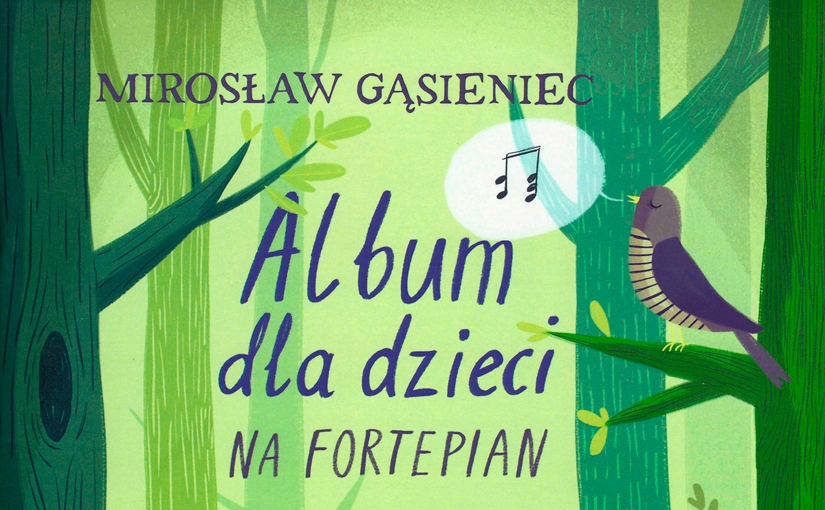 Of the many beautifully presented piano collections suitable for intermediate players in the PWM Edition catalogue, the Album for Children by Mirosław Gąsieniec deserves special attention. Published in 2020, the book includes twelve superbly crafted, varied and original, melodic pieces.

In this review I will also consider the same composer’s earlier Collection of Dances for Piano (2013) which delivers another, similarly enticing set of ten Gąsieniec originals composed in a neo-classical manner, and again suited to players at upper intermediate level (around UK Grade 4-6).

Gąsieniec was born in the charming, historical town of Brzeg, in the Silesian region of southwestern Poland, in 1954. A talented pianist from a young age, his training followed a familiar route, and his professional music career began with a post as a piano teacher at the State Primary School of Music in Brzeg (1974–1975).

Gąsieniec’s had, however, long fostered ambitions to become a composer, as he explained in a recent interview (cited on the PWM website, where you can read a more extended biography):

“I started composing as a small boy, initially the solo piano pieces, but finishing the State Primary School of Music in Brzeg, I already had several pieces for piano and orchestra in my folder with compositions, including Fantazja polska (‘Polish Fantasy’) and the fragments of the piano concertos. […]
Because of the lack of proper composition classes at the secondary school, I decided to ask for such lessons a Polish composer whom I valued the most. When I was 18, my dreams came true, after a private meeting with Witold Lutosławski he gave me a consent for consulting my pieces, which, along with his simultaneous financial support, lasted eight years.”

Gąsieniec’s creative output has grown over the years to consist of over 20 works, including 6 large choral works, pieces for orchestra, chamber ensemble, piano, songs, and film music. It is perhaps this versatility of interest and experience which has led to solo education piano pieces infused with such a rich diversity of mood and implied context.

I first became aware of Gąsieniec’s educational piano music while visiting Poland as a guest of PWM Edition to film piano tutorial videos at the Krzysztof Penderecki European Centre for Music in Lusławice, roughly an hour’s drive from Kraków. You can read about that amazing experience here.

Returning to the UK with both the collections reviewed here stashed in my suitcase, I have been enjoying this music at intervals ever since, and see much potential for its popular adoption here in the UK.

Both books combine effective and memorable compositions with significant pedagogic insight. But of the two, it is the Album for Children which has for me the stronger appeal…

Unlike many of the books in PWM’s “Cat” series of children’s educational publications, Album for Children appears in full-sized portrait format. The cover artwork (see above) is immediately arresting, even by the exceptional standards already set by PWM regular designer Joanna Rusinek.

In the short introduction, the composer tells us,

“The Album for Children contains twelve works written in the spring of 2019. They were directly inspired by the wonderful pedagogic work of the piano teacher Elżbieta Nawarecka with my grandson Franciszek…”

As an aside, I found quite a collection of videos of young Franciszek on YouTube, who appears to have shown prodigious talent from a young age.

“Although aware that there was already quite a lot of piano music for children and youngsters on the market, I decided to try my hand in this domain as well, with the modest hope that in these pieces, ordered according to difficulty, I have succeeded in combining didactic with artistic qualities.”

I believe the composer has succeeded with aplomb in those efforts. The twelve pieces are titled:

So what of Gąsieniec’s musical style?

Firstly it should be noted that the influence of Lutosławski is hardly felt here as a dominant characteristic; these pieces have a gorgeous romantic hue and neo-classical tone to them, the latter as evident in Gąsieniec’s well-honed melodic gift as in the adherence to classical structures and traditional forms.

Hansel and Gretel is particularly classical in mood, with its simple broken chord passages tracing tonic and dominant harmonies beneath a delightfully chirpy and insanely catchy tune. An unexpected key change from D to B flat major towards the end hints at the humour and delicious twists that subsequently prove to be a recurring mischievous feature in Gąsieniec’s writing.

Making Merry and The Chase further demonstrate these qualities, while the Sentimental Waltz takes unexpected harmonic turns to new levels of intrigue. Chorale has hints of counterpoint, and is relatively adroit, while Dumka explores a darker folk-imbued tone.

The harmonies of contemporary popular music (and in particular, warm “added ninth” chords) appear in the two versions of The Cuckoo, in the lyrical Good Friends, and my personal favourite, Reverie, which evokes Hollywood glitz as much as Debussy.

Many of the pieces are didactic in that they introduce a range of important skills, both technical and interpretative, appropriate to intermediate players.

Reverie is a good case in point, its expressive potential realised through the interplay of triplet melodic rhythms against a gently undulating and off-beat duplet accompaniment. The piece will surely prove as educationally useful as it is musically rewarding and engaging.

Album for Children is genuinely a fresh treasure!

Turning to Gąsieniec’s earlier collection of dances, the pedagogic benefits of this set of pieces will inevitably be in their introduction of dance styles, old and more contemporary, and variously of Czech, Neapolitan, French, Spanish and Argentinean origin.

It is in the nature of these highly appealing pieces that they offer less scope for original flair; all are written in an easy neo-classical style that is such a popular success in educational piano music. But this is certainly not to say they are uninteresting pieces; on the contrary, there is again much to relish.

The Barcarole is (for me) a standout piece, notably breaking up the upbeat momentum with a beautifully lyrical piece full of repose, perhaps emulating not only the Venetian gondoliers’ song, but also channelling its famous Chopin precursor.

Both of these Gąsieniec piano collections are highly enjoyable additions to the piano teacher and student’s music library. They deliver a characterful and pedagogically useful resource; both books come highly recommended.

There’s no denying, however, that they are competing in a crowded market, filled with essential and wonderful piano music…

The lack of recordings will be off-putting for some, and in its absence there is a sense of “buying blind”. For my part, I can and will thoroughly recommend these titles, and as highly as anything I discovered on my journey to Kraków…

Simply, I think these publications, and especially the stunningly presented Album for Children, are superb.