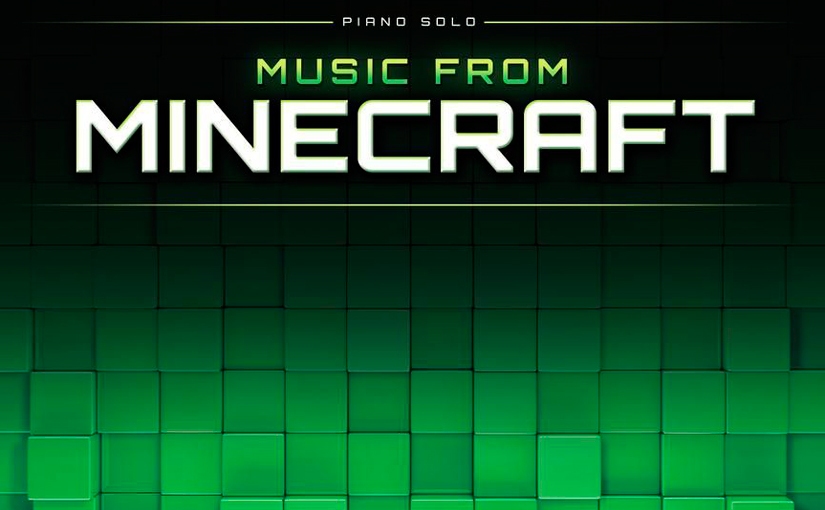 When I heard that Hal Leonard were bringing out a Music from Minecraft solo piano album, I was intrigued but unsure what to expect, not least because while interested in the concept of the game, I haven’t actually played it.

The music is composed by Daniel Rosenfeld, a German electronic composer and sound engineer who performs under the moniker C418. Rosenfeld began creating music on his computer as a teenager, and by the age of twenty had an established growing career.

Rosenfeld’s music for Minecraft was created when he was in his early twenties, and has been released on two albums in conjunction with the game itself: Minecraft Alpha (2011) and the longer, lusher Minecraft Beta (2013).

The present sheet music publication draws twenty pieces from across both those albums, presenting solo piano transcriptions suitable for intermediate to advanced players. The target audience will predominantly be teenagers and young adults who play the game, and that’s a huge target!

So let’s take a look…

The twenty included transcriptions are:

The pieces are spaciously notated, and range in length from one page (Dry Hands and Sweden) to ten (Alpha), the majority being two-to-four pages.

Here are two authorised sample pages, one easy, the other more complex:

At first glance the music appears to be suitable for intermediate players, but there are some caveats, and having played through the book I have found that several pieces require more advanced ability and technical skills.

With over 238 million sales, Minecraft is the best-selling computer game in history, and it is no wonder that this music has established itself as among the most popular and praised soundtracks of its kind.

Rosenfeld’s music draws on a number of obvious influences, most notably electronica, ambient, chillout music, and the soundtracks of earlier computer games and anime. The overall vibe is relaxing, unobtrusive, downbeat in mood, and basically a perfect match for the absorbing sandbox video game environment.

From dabbling with underground “trackers” as a teen to then embracing Ableton Live, Rosenfeld’s musical approach fundamentally developed in the digital domain. It is important to note that from conception to realisation, a software sequencing environment inspires a very different creative process to that of a composer working with acoustic instruments and voices. We should not be surprised that the music here often travels an unfamiliar path.

It is also still fairly rare to see electronic music subsequently transcribed for piano solo. This score is thus instructive in terms of the developments we might expect as sequencing techniques play an increasingly significant role in mainstream composition.

In terms of the rhythmic elements, the pieces translate well to the piano, and perhaps more effectively than commercial pop songs (vocal syncopations are so difficult to convey on paper). With its quantised qualities, sequenced music plays well with standard music notation. But it should be noted that at times, the rhythmic interplay between the hands could prove challenging for less advanced players.

The point could be made that a pianist’s concerns with legato, cantabile and expressive phrasing don’t significantly factor in computer-based music. It’s a fair point, but we might counter that not all good music translates into good piano music. For the piano music reviewer, as well as for educators, this has to be a consideration. In this instance, though the pieces look easy enough on paper several are surprisingly difficult to play in practice, and this should be factored in when considering suitability.

None of this is to imply that I am unimpressed with the transcriptions. Having compared these versions with the original electronic recordings I am highly appreciative of their overall faithfulness to the source material.

My takeaway is that it will be interesting to see how electronic composition techniques feed back into instrumental performance practices in the years ahead; it’s a question that for me at least this publication intriguingly raises.

Minecraft fans will no doubt rejoice in the release of these solo piano arrangements, and (caveats aside) I think that the publishers have done a highly impressive job of creating, for the most part, so useful a score.

The music itself has so many beautiful and distinctively fresh elements; I’ve been listening to the originals on repeat, and these piano transcriptions must certainly be commended for their loyalty to the material, regardless of the performance challenges they pose.

For some this could prove to be one of the must-have piano publications of the year. I have no doubt that the target audience will find these transcriptions as engaging and absorbing as Minecraft itself.

I should mention that individual pieces are available as digital downloads at pocket-money prices, but personally I think that paying £14.50 for the whole lot in a proper book offers far better value.

2 thoughts on “Music from Minecraft”