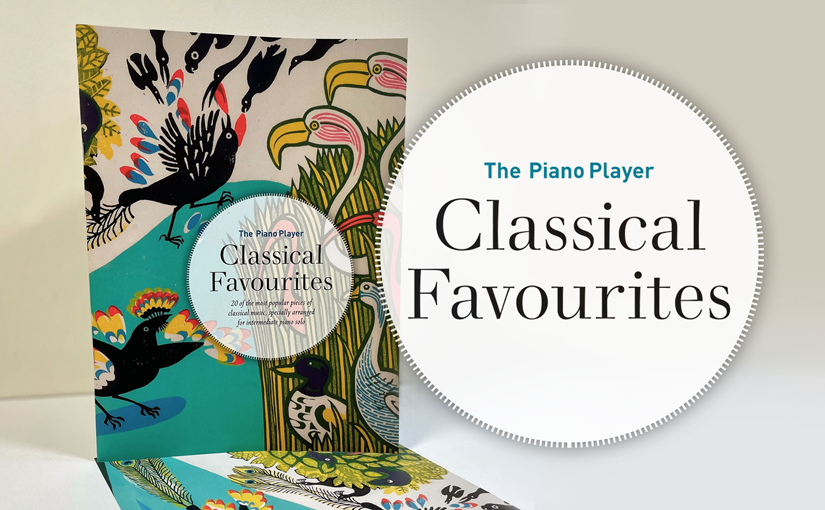 Less than three months after Faber Music launched ‘The Piano Player’ (a plush new series of intermediate piano solo collections) with British Classics (reviewed here) they are back with the second instalment.

The Piano Player: Classical Favourites features “20 of the most popular pieces of classical music”, some originals but mostly arrangements. And in line with the signature style of this new series, the publication is beautifully presented sporting the lush artwork of Edward Bawden (1905-1989)…

Agreeing “20 of the most popular pieces of classical music” can’t have been an easy task for the good folk of Faber Music, but must have been a rather enjoyable one! Here is their final selection for this collection:

Some of these pieces appear in their original solo keyboard form, notably the Bach, Beethoven, Debussy, Satie and (apart from one simplified chord) Chopin pieces. The rest are intermediate arrangements of pieces originally scored for larger ensembles.

All will be well-known to the adult enthusiasts who invest in the collection, with the likely exception of Ethel Smyth’s The March of the Women, seemingly an interloper here; searching Apple Music I only found one recording of this rousing chorus, which proves to be an exuberant affair. For those curious about this intriguing find, Faber Music‘s Rachel Topham shared this enjoyable story with me about the piece:

“A famous rendering of it took place in 1912, at Holloway Prison, after many suffrage activists were imprisoned because of a window-smashing campaign. The conductor Thomas Beecham visited Smyth in prison and reported that he found the activists in the courtyard ‘…marching round it and singing lustily their war-chant while the composer, beaming approbation from an overlooking upper window, beat time in almost Bacchic frenzy with a toothbrush.”

The arrangers of these many pieces aren’t credited, and some are no doubt drawn from previous Faber Music collections and anthologies (of which we can now enjoy a significant range). Most are appropriately sympathetic to their source material while successful as piano solos for the intermediate player; I found the whole collection enjoyable to explore.

In terms of level, there is actually considerable variance, from the easy Morning and Eine Kleine Nachtmusik (both around Grade 2-3) up to La Fille Aux Cheveux de Lin, previously a Grade 8 piece. For adult returners and enthusiasts this presents a nice assortment from the comfortingly accessible through to the more challenging. Helpfully, the pieces appear in the book roughly in order of ascending difficulty.

Those who have already seen the British Classics title in this series will be pleased to hear that Faber Music have maintained the high standards which that publication has set for the series.

The matt card cover is resplendent indeed in its vivid reproduction of Bawden’s Daw in Borrowed Feathers, and once again the book includes a pull-out A4 reproduction of the artwork that can be framed. Once the series is complete, we will have become entirely familiar with Bawden’s biography, here again given a full-page treatment at the start of the book.

Concluding my review of the first entry to this series I noted,

“I suspect that the series as a whole is going to be a huge hit for Faber… the sumptuous presentation, matched by superb arrangements and pitch-perfect selection of musical favourites, practically guarantee success for this publication. Yet again it seems to me that Faber have perfectly read the market, and if this first entry is representative, I think we will all be seeing a lot of The Piano Player series in the coming months and years.”

I am happy to say that this second book in the series only consolidates my enthusiasm, these publications already establishing themselves among the many highlights of this excellent catalogue.

The Piano Player: Classical Favourites is a collection which is likely to bring players many hours of pleasure and musical reward.