As many will know, pianists and classical music lovers are this year marking the centenary of Debussy’s death in 1918.

In a previous post I addressed the frequently asked question, “where to start?” exploring his piano works, suggesting Bärenreiter Edition’s Easy Pieces and Dances collection and their excellent urtext edition of the Preludes livre 1 as great entry points.

In this post I will look at a couple of Bärenreiter’s other Debussy editions – the two volumes of Images, but first Pour le piano. These are virtuoso concert works which qualify for the diploma and professional tag in terms of difficulty.

Though the central piece of this three-movement work, the Sarabande, dates from 1894, Pour le piano was only completed and published in 1901. It is often regarded as a watershed in Debussy’s compositional development, with enough formal gestures of the past to place it at the end of his first phase – which included such gems as the Deux Arabesques (1888), Reverie (1890) and Suite Bergamasque (also 1890) – but with strong hints of the more searching, experimental music of his mature style.

The opening Prélude is a showpiece of sparkling effervescence from its first notes, which build to a stunning climax in which glissandi contrast ecstatic and sonorous chordal motives. The Satie-influenced Sarabande is as expected a more solemn affair, but is imbued with the lightness of touch that is such a gorgeous feature of Debussy’s earlier works. The closing Toccata is the most challenging of the three movements, a piece which concludes this tremendous concert work with towering pianistic bravura and ends in a blaze of triumphant affirmation.

Bärenreiter’s urtext edition introduces itself as “The Authoritative Performing Edition” – a claim I feel it comfortably lives up to.

With such abundant – and brilliantly written – content, it is little surprise that the music itself only appears once we reach the staples in the middle of the book!

While the score itself can be described as a critical scholarly edition, drawing on all the known sources, and including detailed critical commentary, it is no less a fabulous performance edition, with crystal clear notation printed on cream paper, generously spaced as in this authorised sample from the opening of the Prelude:

It is “authoritative” indeed!

If Debussy’s mature style is plain to hear in Pour le piano, it has exploded into full bloom by the time we reach Images 1st Series (1903-5) and Images 2nd Series (1907). Writing to his publisher Jacques Durand about the first series in August 1905, the composer enthused:

“I believe – without unwarranted vanity – that these three pieces will prove to be good and that they will take a prominent place in the literature of piano music … to the left of Schumann or to the right of Chopin … as you like it.” 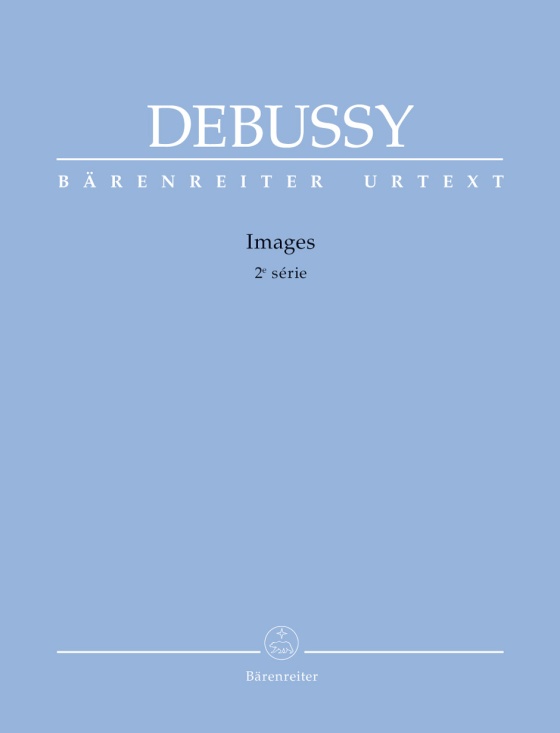 Upon the publication of Douglas Woodfull-Harris’s urtext version in 2012, Bärenreiter wrote:

Like Pour le piano before it, each of the two sets of Images are structured in three movements which follow classical precedents.

Reflets dans l’eau opens Images 1, and is deservedly one of the composer’s best-loved pieces, a picturesque masterpiece of tonal colour, harmonic alchemy and technical control. Hommage à Rameau meanwhile recalls the Sarabande from Pour le piano, and is once again a stately dance in three-time. Here, hints of Satie as precursor are perhaps overshadowed by the lyrical expressivity and ripe chromaticism of the lush harmonies. The final Mouvement is – following a similar trajectory to Pour le piano – another dazzling toccata, generating an incredible sensation of animated motion before speeding away into the distance.

Still more evocative – and surely deserving of the term “impressionism”, whether Debussy approved or not – the pieces of Images 2 are a tour de force which bursts to the top end of the piano repertoire in difficulty as well as in quality.

For clarity – textural as well as textual – these three pieces are written across three staves throughout, as in this example:

The brilliant Preface covers much the same ground as that for Pour le piano, albeit written by a different editor. A comparison between the two is instructive, but suffice to say that each is excellent. Here again we are treated to a highly readable and informative introduction to the genesis of the works, their aesthetics, performance practice and notes on the edition.

Suffice to conclude, then, that as with Pour le piano, Bärenreiter have again raised the bar and produced a winning critical urtext edition of Images 1 and 2.