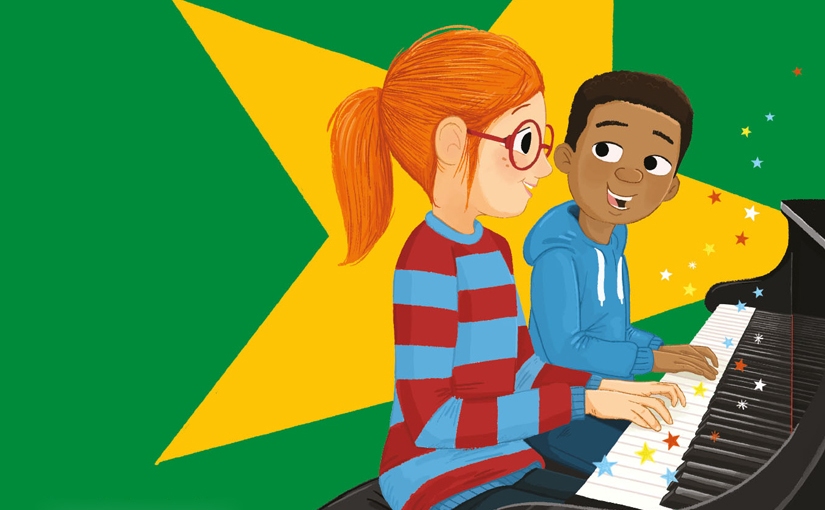 ABRSM’s popular Piano Star series, which originally aimed at bridging the gap between the pupil’s first tutor book and ABRSM Grade 1 piano, continues to grow. The seventh and latest book is Piano Star Duets, which offers 26 newly composed or arranged piano duets for ‘early beginners to Grade 2’, compiled and edited by David Blackwell and Karen Marshall.

With five of these pieces also selected as duet alternatives in the 2021-2 ABRSM Piano Syllabus, which I recently reviewed here, the book is likely to tempt teachers and students looking for a one-stop collection of duets that they can dip into over a couple of years of lessons. That the pieces have been commissioned from some of our leading pedagogic composers further adds to the attraction.

Before taking a look, full disclosure. I contributed a single piece each to four previous titles in the series. However, I receive no ongoing royalty income from those, have absolutely no vested interest in the series, and chose not to contribute to the Piano Star Duets collection. I write here with full independence.

So, with that out of the way, let’s jump in with all four feet…

For those familiar with the series (which I assume most purchasing this will be), Piano Star Duets is easily identifiable as a member of the growing Piano Star set, its cover illustration by Tim Budgen in much the same vein as predecessors:

A noteworthy detail here is the cover announcement that the book reaches up to Grade 2 level, further than the series has previously ventured.

Within, Piano Star collectors will immediately clock that this is a black-and-white book, leaving behind the hugely appealing colourful visuals that have been such a particular strength of the previous six books. Indeed, beyond the opening introductory pages, there aren’t even black-and-white illustrations here, just words and music.

Perhaps less immediately apparent, but certainly mitigating against any disappointment at the lack of colourful visuals, Piano Star Duets is 50% larger than the other books in the series: they mostly have 32 pages, but this new book has a decisively more generous 48.

There is a mixed approach to the presentation of the duet parts, which I like. Some are written in full score, one part above the other. Others appear with individual parts on facing pages. As both approaches are likely to be encountered later in a player’s development, this is a useful tactic.

The pieces appear roughly in progressive order of difficulty, and include pupil-pupil duets as well as the more usual pupil-teacher format; the book also includes two trios, including Blackwell’s Non-stop Calypso, a round in which three pupils each play a single line of music with one hand.

Other than the scores and titles, no information is provided about the composers or the pieces themselves. However, the book includes some useful extra content comprising a few games to encourage duet awareness, and a very helpful page called Duet Playing – The Top Ten Skills.

Introducing the collection, Blackwell and Marshall tell us,

“Piano Star Duets has been designed to develop the musicianship and ensemble skills of young pianists, through an exciting collection of new pieces in different styles and by a range of composers. There are lyrical duets and rhythmic jazzy ones, traditional melodies and pieces that tell a story, pop-style pieces and duets with special effects – there’s something here to engage every student!”

Given the editors’ enthusiasm for the music they have collated, I was naturally keen to try out the pieces, but here I hit a snag. During the review period my studio was still in lockdown, and given the time-lag of online teaching I was unable to try them out with students. This is where having a recording of each part would come in so handy; sadly ABRSM have not supplied one.

Given ABRSM’s current propensity for all things digital and online, this came somewhat as a surprise, and in the post-pandemic world seems an odd and disappointing thing for them to have overlooked. However, I understand that recordings will be forthcoming soon.

Here then is the full list of composers and the pieces they have contributed:

As advertised, the collection delivers a varied and enjoyable selection of pieces, from traditional pedagogic fare through to more experimental and musically interesting concoctions. Of the latter, Alison Mathews’ Chitter Chatter and Woodland Folk Song both impress with their interesting textures, voicing and use of the instrument. June Armstrong’s Butterfly is also lovely.

Among the slower and more lyrical pieces, the highlights for me are definitely Nikolas Sideris’ Dancing with the Moon, Zidani’s Last Day at the Fair and Hammond’s gorgeous Raindrop Reflections.

Many of these pieces are the work of composers and musicians whose reputation extends well beyond the cloisters of the pedagogy community, and I think that students will find much here to enjoy.

I must note, too, how wonderfully the Diabelli Melodic Study stands the test of time when juxtaposed with these newer compositions; we must hope that its inclusion will whet children’s appetite for a fuller exploration of the great repertoire inherited from composers of old. I have always found music of the classical era immensely popular with students of all ages, and especially young children.

Were Piano Star Duets a standard music publication, I could finish my review at this point, highly recommending the publication as a very attractive collection of useful and enjoyable duet material for younger players at this level.

But given ABRSM’s role in music education, some are likely to have broader expectations which must also be considered: to what extent does Piano Star offer a coherent curriculum for the beginner to elementary pianist, and how well does it dovetail with the board’s suite of assessments?

As core teaching material, some of the (now seven) books are more obviously driven by pedagogy than others. The clear omission is the lack of beginner Primer, aside from which the books might easily step in for a method series. That said, I don’t personally feel Piano Star yet has the depth of pedagogic care and joined-up thinking that characterises the best method books.

As supplementary books, meanwhile, Piano Star seems to have something of a flighty on/off relationship with ABRSM’s exams; two of the books (Piano Star 2 and Piano Star Grade 1) are explicitly linked to the syllabus, but the others lack an overt connection.

Teachers and students working through these materials alongside the board’s assessments will at least need to contend with a few quirks, of which these are simple examples:

The Piano Star series has presumably been a success for ABRSM, and it’s easy to understand the temptation to keep expanding the range for as long as customers are happy to buy the books.

But while Piano Star offers a refreshing pool of excellent resources, the river now seems to be somewhat bursting its banks, and none of us wants our pupils to drown! Teachers will want to pick and mix from these books rather than using them too methodically.

Those who are already using the original Piano Star books will likely have as much duet material as they need, but for those who don’t (or who want this material for exam use), Piano Star Duets certainly offers solid value, and includes some superb and creative pieces.

As a book of approachable, enjoyable and well presented duets for youngsters, Piano Star Duets deserves the highest praise, and ABRSM along with the book’s editors must be congratulated for again expanding the range of quality music suited to younger students’ needs.