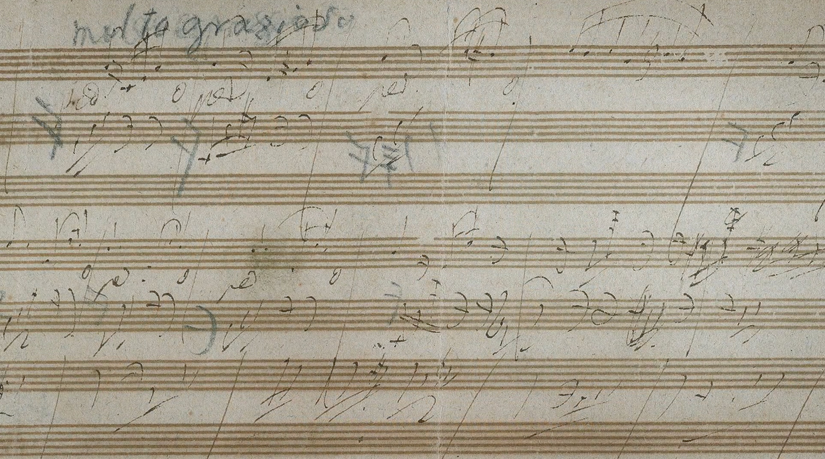 Bärenreiter’s new urtext edition of Beethoven’s beloved Bagatelle is one of the most unexpectedly fascinating publications to arrive in a while, offering as it does a radically different version of the piece alongside the one we know so well.

Believed to have been composed between 1808-10, the autograph manuscript of Für Elise remained in private hands until 1865, at which point one Ludwig Nohl discovered it in the possession of a local piano teacher in Munich. Nohl published this version (we’ll call it “Version 1”) in 1867, and it’s the one we all play to this day. It’s really not bad.

How surprising to learn, then, that in 1822/3 Beethoven went back and revisited his earlier sketch, substantially revising it for publication within a planned (but unrealised) collection of 12 Bagatelles. Version 2.0.

Those sketches survive, and for Bärenreiter’s new edition Mario Aschauer presents not only the most authoritative text of Version 1, but also includes his fully performable completion of Version 2.

The review below includes Aschauer’s own recording of Version 2, so you can hear it for yourself and make up your own mind. Be prepared for a bit of a shock, though; right from the start, Beethoven’s revised version is very different to that which we know…

“Undoubtedly, Beethoven’s “Für Elise” is one of the most popular pieces of classical music. While the manuscript Beethoven gave to its (anonymous) dedicatee has been lost since the 1860s, he had kept his draft of the piece and returned to it probably in 1822 when compiling a set of 12 Bagatelles.

“Für Elise” was to become No. 12 and Beethoven revised his draft with pencil along with other manuscripts he planned to include in the set. However, the project never materialized and Beethoven abandoned the revised drafts.

The pencil revision features three prominent changes. It shifts the left-hand accompaniment of the refrain to the right by one sixteenth note, introduces a formal redesign of the last third of the piece with a newly sketched ending, and reinstates some unused material from the original draft, such as melodic variations in the refrain and a four-measure transition into the first couplet in F major, which Beethoven had not cancelled when writing out the fair copy of Version 1.

When, over a decade later, he returned to the draft to revise it for Version 2, he took a step backwards in its compositional development leading to the curious situation that Version 2 features details that are both earlier and later than Version 1.”

Bärenreiter have kindly made available the first page of the 1822 Version 2, which illustrates these points:

The semiquaver shift of the LH pattern is as fascinating as it is unnerving, as are the restored bars leading into the second section. But I am equally struck by the tempo/mood indicators: 1810’s Poco moto has by 1822 changed to Molto grazioso, conveying a rather different impression of the composer’s most basic performing intentions for the piece.

Brace yourself to have a listen to Aschauer’s recording, bearing in mind that had the 1822 publication gone ahead this is the Für Elise we would all have grown up with:

The new publication (BA 11839) is a slim soft-covered score that follows the series design ethic of all Bärenreiter urtext editions. The cream pages within begin with the usual title page and contents, followed by a two-page introduction by the editor in German, repeated in English.

The score for Version 1, the Für Elise we are familiar with, takes up the next three pages, after which Aschauer presents the surviving draft of Version 1.

Here, Beethoven’s later pencil annotations from 1822 are shown in grey text alongside the main score, allowing the reader to piece together the historical evolution of Beethoven’s various revisions.

The publication’s 16 pages conclude with a two-page Critical Commentary in English. The whole thing is, in a word, impeccable.

There’s no denying that Aschauer has delivered an important and truly eye-opening edition here.

Anyone interested in Beethoven’s music in general and Für Elise in particular will undoubtedly cobble together the modest asking price of £4.00 to purchase a copy straight away.

For those who simply want to play the famous Für Elise and don’t already have it in a collection, this authoritative but inexpensive edition makes a natural first choice.

But I suspect it will be those who already know and play the established version who will find this publication as fascinating as I have, even if there’s something of a danger that we will all find ourselves oddly confused about the piece from now on!

Having played Version 2 several times, I personally still prefer the more familiar Version 1. I remain undecided about the rhythmically displaced LH of the revision, but the clear Rondo form and phrase structure of Version 1 seems to me the better balanced overall.