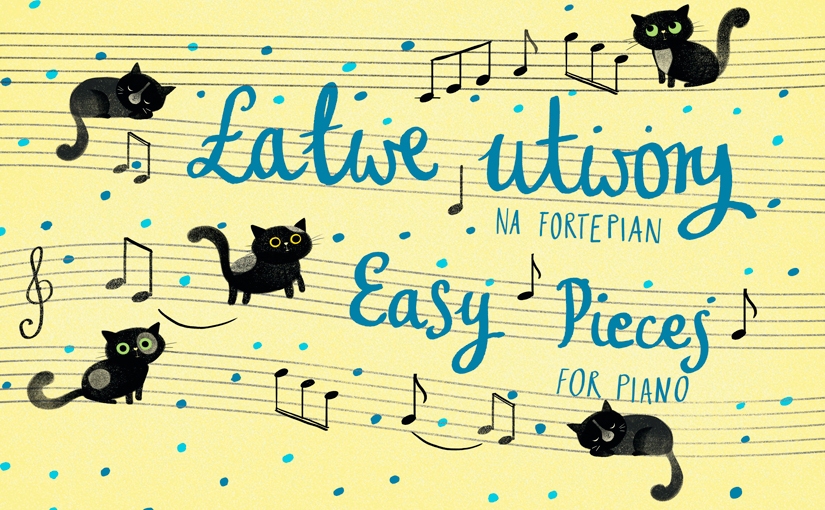 Stanisław Prószyński’s name will be new to many readers, as it was to me when I found a copy of his Easy Pieces for piano on the shelf at the PWM headquarters during my visit to the publisher in Kraków in 2020.

Then freshly reprinted with a lovely new cover design by Joanna Rusinek, the book includes 15 pieces suitable for elementary players (UK Grades 1-2), and I brought a copy home (along with the many other books which I have been introducing here over the months).

Prószyński was born on January 31, 1926 in Warsaw. He took an early interest in music, learnt the piano as a child and went on to study at the Warsaw Music Academy, where he won numerous prizes.

During the course of a distinguished career in music, Prószyński was a theatrical music director and composed music for films, radio and TV plays. He was a prolific writer and successful journalist, as well as a teacher who worked in a variety of educational settings from local school to conservatoire.

Prószyński died in Warsaw on May 14, 1997, leaving behind a significant body of instrumental and vocal music, including many educational works.

The Easy Pieces for Piano album dates from 1954, and is one of his few works still widely available, thanks to the PWM edition.

The book itself has a charming soft cover in landscape format, with 28 cream pages within, all matching the usual house style for PWM’s wonderful “Cat” series of childrens’ music books.

Other than the title page there is no preamble, and the contents and credits appear at the rear of the book (which always mildly confuses me!). Unlike some of the recent books in this series, Easy Pieces for piano does not include further illustrations within.

The titles of childrens’ pieces are always so important, firing the young player’s imagination while informing them of the mood and expressive nature of the music. The fifteen pieces here have titles translated:

Some of these may require a little more explanation than others. In particular, the Obertas and Krakowiak are Polish folk dances, while teachers will want to dig into the imagery, meanings and context of other titles here to ensure they speak in relevant terms and appropriately to today’s children.

The musical style is of its time, drawing on the legacy of Bartók’s use of folk melody in educational music, with a simple and characterful appeal that reminds me of Kabalevsky, albeit with a Polish rather than Russian flair.

The level covers the whole of the elementary spectrum (so from pre-Grade 1 to around Grade 2 here in the UK), and pieces appear in their order of difficulty, often consolidating ideas and techniques previously introduced so as to provide a fast-track piano method, or more likely a supplementary collection that would fit alongside other methods.

The first six pieces stay close to the five-note position in both hands, although Song includes some LH chords which veer onto black keys, while On the Rink extends the RH range to six notes.

Straight away, these are enjoyable little pieces. Lullaby has a gentle melodic charm with unexpected twists and syncopations lifting it beyond the usual beginner fare, while Song introduces two-note playing in the LH, with more than a little dissonance.

The Cossack Dance and On the Concertina, typical of pedagogic piano music that I have discovered from Poland, provide an early focus on the importance of articulation, including staccato and legato in opposing hands simultaneously. Meanwhile, the zany Looking Glass summons the same folk melody as the well-known carol Deck the Halls, varied and played in contrary motion between hands.

From Worries, an evocative piece which seems genuinely stuck in its own rut, things get more technically ambitious quite quickly. This piece moves beyond the five-note construct altogether, and also includes four-note-runs in legato thirds, quite an advanced technique at this level; the piece is also blessed with multiple time signature changes.

Puppet Clown and At the Hunt both include finger alternations on one note, and the latter is the first piece in the collection to use compound time.

Apprentice Smiths, likely to be a pupil favourite, lifts the level beyond Grade 1, and has an infectiously quirky tune that will benefit from spiky staccato. Fun and Games is perhaps a pun title, bearing in mind the hands keep nearly colliding in the treble register throughout, a trick repeated in Obertas.

Teachers have much to gain from studying this material, and for fans of the educational music of the mid-twentieth century this is an essential purchase. Finally, those selecting music for festivals and exam syllabi may find themselves cherry-picking the more irresistible pieces from the collection, many of them as catchy to hear and play as they are superbly crafted.

PWM Edition must be thanked for not only keeping this rarity in circulation, but for doing so with such a gorgeously presented little volume.