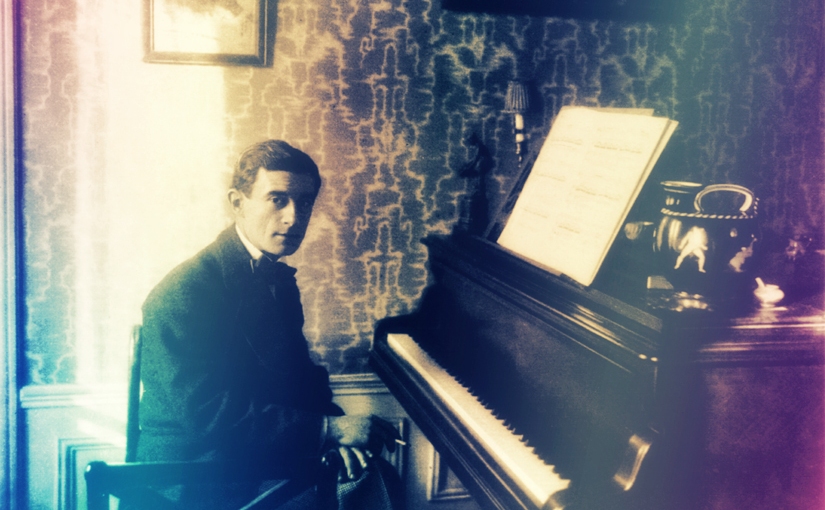 “…the wellspring of all the pianistic innovations which have been thought to be found in my work.”

So said composer Maurice Ravel (1875-1937) of his breakthrough composition Jeux d’Eau, completed on November 11th, 1901 and dedicated to his teacher Gabriel Fauré. As such, the work is surely a milestone not only in Ravel’s compositional development, but also in that of the classical piano repertoire.

“…laughing at the waters…”

At the time of composing Jeux d’Eau, Ravel was in his mid-twenties, attending Fauré’s composition classes at the Paris Conservatoire, and on the cusp of establish himself as a young composer of note having recently won a Second Prize at the Prix de Rome.

His previous piano pieces had included the Menuet antique of 1895, and (in 1899) the dreamy Pavane pour une infante défunte. But it was with the Jeux d’Eau the Ravel embarked on a series of more ambitious, virtuoso pieces, written with a shimmering impressionism that recaps Liszt, and which would soon include the Sonatine and Mirroirs (both completed in 1905) and Gaspard de nuit (1908).

Ravel headed the score to Jeux d’Eau with the epigraph, taken from a poem by his contemporary Henri de Régnier,

“The River God laughing at the waters that tickle him’”

According to the composer, the piece was “inspired by the splashing of water and by the musical sounds of fountains, cascades and rivulets”.

There’s little doubt that he was also inspired by Liszt’s Au bord d’une source and Jeux d’eau à la Villa d’Este. But as Nicolas Southon explains in the Preface to his new Bärenreiter urtext edition,

The piece was given its first public performance at the Salle Pleyel in Paris in April 1902 by Ravel’s friend, the concert pianist Ricardo Viñes, receiving a somewhat mixed reception. Suggests Southon,

“With its sparkling textures, its extraordinarily refined harmonies, and its unprecedented sonic imagination, the piece appeared unnecessarily complicated to the traditional ears of the epoch.”

However, the work immediately found a place in the standard repertoire, and has remained one of Ravel’s most popular and influential piano pieces.

Nicolas Southon’s detailed Preface to the new edition lists the many extant sources he has referred to: an undated initial sketch, three complete manuscripts (the last of which formed the basis for the first edition, and is here the primary text used by Southon), the first edition (1902), second impression (1912), the independent Schirmer edition for the North American market (1907), and the Max Eschig edition (1928).

In several cases he was able to look at copies of the published editions with Ravel’s own handwritten corrections. And in addition to re-evaluating these many sources, he consulted memoirs from musicians close to Ravel such as Vlado Perlemuter, Jacquers Février and Hélène Jourdan-Morhange.

Importantly, the 13-page work is followed by an 8-page Critical Commentary offering exhaustive insight into the text, opening up new perspectives on the piece.

The score itself is well spaced (important, bearing in mind the density of the textures at times!) and gorgeously engraved on luxuriant cream paper in Bärenreiter’s house style.

As noted earlier in the review, fingerings have been added to Ravel’s few proposals by the concert pianist Alexandre Tharaud, whose complete recording of Ravel’s piano music for the Harmonia Mundi label I can also highly recommend.

In addition to Southon’s detailed and engaging Preface, Tharaud has written an insightful section of Notes for Performance, in which practical advice is mixed with poetic inspiration.

For many years performers of this masterpiece enjoyed Roger Nichols’ excellent Edition Peters score of Jeux d’Eau, later joined in the catalogue by the Henle Urtext edition in 1998.

In lending a fresh pair of eyes to the various sources, Nicolas Southon has now brought us an exemplary, dare I say authoritative score, and I suspect this is the version to which performers will quickly turn.