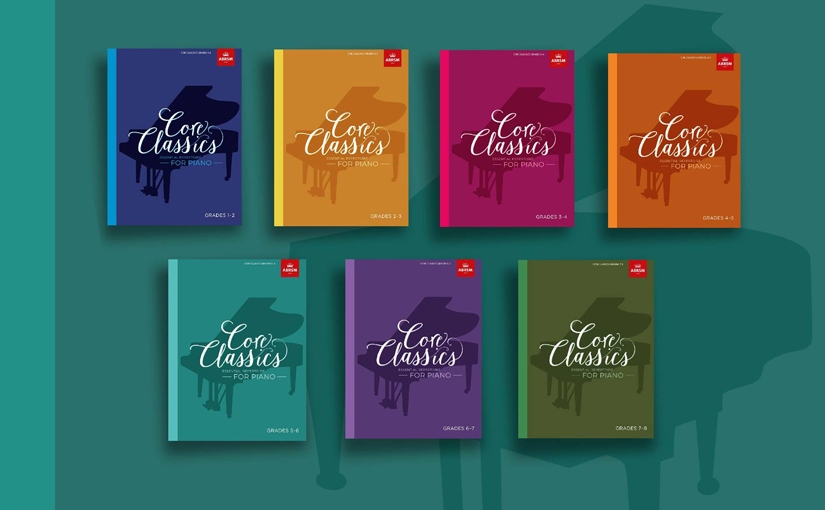 Products featured on Pianodao are selected for review by ANDREW EALES.
When you purchase using the site’s retail links, Pianodao may earn a small commission, but this does not affect the price you pay.

GET ADVICE ON YOUR PLAYING

Once in a while, a publication arrives for review which is based on a great concept and is itself essentially a very good product, but where the mismatch between the original intention and its actual delivery is a glaring one, as though at some point in the developmental process there was a communication breakdown.

That is a particular disappointment, given that this is actually a beautifully presented and musically interesting series. So let’s find out exactly what Core Classics has to offer…

“Core Classics is a collection of seven books of music, covering Grades 1 to 8. Selected and authoritatively graded by piano specialists, this series contains a rich selection of engaging pieces to form the backbone of any pianist’s repertoire.
With 130 pieces spanning four centuries, Core Classics is equally valuable for learners working towards a grade exam, between exams, or playing for leisure, building technical skills and confidence.”

So far, so brilliant!

I’m sure I’m not the only piano teacher eager to hold a set of books that cover all bases, featuring the best and most popular piano music ever written, all carefully organised in progressive order. Such a series, well edited and engagingly presented, would deserve to sell like proverbial hot cakes.

And how refreshing to see ABRSM again acknowledge the aspirations of the many who want to play the piano for pleasure and deep enrichment: an encouraging recognition of a much broader constituency.

What would you say the “core classics” are? Which composers and works would you describe as truly “essential” repertoire for Piano? Perhaps take a moment to literally or mentally compile a list…

Mine would certainly include something amazing from Bartók’s For Children, some Kabalevsky, Rybicki and Walter Carroll at elementary level.

For intermediate players I would have to feature Prokofiev’s brilliant and imaginative Musiques d’infants, find room for a Clementi Sonatina, and of course a Satie Gymnopédie. Did I forget Beethoven’s Für Elise and the first movement of the Moonlight Sonata? How about McDowell’s To A Wild Rose?

As players advance, Mozart’s K.545 is surely “essential”. Who doesn’t want to have a go at Joplin’s Entertainer and Maple Leaf Rag, or Chopin’s Nocturnes and Waltzes? Debussy’s easier pieces, Children’s Corner, the Arabesques and Clair de lune remain immensely popular. And Schumann’s Kinderszenen is obviously another must!

I would also include some ’new classical’ pieces (Philip Glass, Michael Nyman, etc) given their immense popularity with students and audiences, and the inspiration I have repeatedly seen players of all ages derive from them. Several top classical concert pianists (including Víkingur Ólafsson, Valentina Lisitsa and Lang Lang) are programming and recording this music; ignoring it just seems snooty.

What a disappointment then to find that none of the above are included in the series!

Certainly there are pieces by Mozart, Beethoven and Schumann nestling within these publications (albeit rarely their best-known melodies). Indeed the final book in the series stands out for including several popular pieces, such as Schubert’s evergreen Impromptu in A flat, Liszt’s gorgeous Consolation in D flat, and the Rondo from Beethoven’s Pathetique Sonata.

But ironically, one of the most striking features of the other six books is the near-absence of popular favourites. And several of the most important composers in the solo piano and pedagogic repertoire are entirely missing from the series.

Specifically, the Core Classics series doesn’t include any music at all by:

ABRSM’s decision to miss out the music of so many truly core composers is deeply problematic in terms of introducing developing pianists to the key innovations and personalities that are such a seminal foundation for properly appreciating and approaching the piano repertoire.

Complete listings of the pieces can be found on the Musicroom listings here, but suffice to say that instead of the masterpieces of the great composers listed above we find old pedagogic and exam pieces by such as George Dyson, Thomas Dunhill, Felix Swinstead, Harold R. Clark, Terence Greaves, William Alwyn, Lionel Salter, David Bedford, Michael Rose, Alan Haughton and Harold Samuel, among others.

Some of this music is certainly of interest, but it’s truly incredible that ABRSM consider these works to be “core classics”.

Astute readers will no doubt have twigged that what these composers have in common that they were all commissioned by ABRSM to write criteria-driven exam music over the decades. Stravinsky, whose Tango and Les Cinq Doigts are predictably missing, would perhaps be kicking himself!

And were it ABRSM’s intention to both highlight female composers and excavate their own publishing vault, they must have been delighted to unearth the Little Habeñera, included in the Grade 2-3 book and composed by one Jean Mackie. But unfortunately for the rest of us, the piece is one of the several here that are far from “essential”. Indeed, such is Ms. Mackie’s obscurity that where other composers’ dates are shown, hers are simply listed as “(20th Century)”, despite the fact that ABRSM themselves commissioned her to write the piece for them in 1973. Oh dear!

I rather doubt that anyone at ABRSM seriously believes that their own-commissioned exam fodder, somewhat dominating these books, is now more widely regarded as core classical repertoire.

Nor can I imagine that the respected musicians whose names are listed at the front of each collection overlooked ‘the greats’; rather that at some point the project veered away from the wonders of the beloved solo piano repertoire and morphed into an exercise in refreshing older exam repertoire.

Moving to the publications themselves, I am very pleased to be able to give a more positive report. I have long held that one of ABRSM’s key strengths is their ability to turn out an outstanding finished publication, and the Core Classics series is happily no exception.

Impressively, the books include something approaching a critical commentary; at the rear of each, editorial consultant Richard Jones lists sources, notes where dynamics (etc) are editorial, and even acknowledges where revisions to the musical text have freshly been made in these editions. These are all important points to include, and are too often missing elsewhere, notably in ABRSM’s previous Encore series, where editorial dynamics are frequently added without comment.

Jones is certainly to be applauded for an excellent editorial job well done.

The covers (see image above) are lovely too: understated, classy, and presented with a tactile mixture of matt and gloss finish. In terms of presentation, the only real disappointment is that ABRSM have included neither any background information about the pieces, nor any tips for playing and teaching them.

Taken as a whole, ABRSM’s Core Classics: Essential Repertoire series offers a useful and often attractive mix of well-known and lesser-known music that is well-suited to their exam requirements.

If you are looking for a significant resource of such pieces, the series certainly has you covered, and there’s enough to enjoy here to keep students busy for years to come. And while the books don’t include as many instantly recognisable classics as ABRSM’s popular Encore series, they have the advantage of providing far more material, and with better music editing.

But it seems to me that ABRSM could more accurately have described these collections as books of selected exam pieces from previous years, in the mould of their venerable Keyboard Anthology and Short Romantic Pieces series, rather than elevating them to “Core Classics“.

I suspect that many experienced teachers will agree that, fascinating though much of this music is on its own terms, ABRSM’s Core Classics: Essential Repertoire falls far short of offering a pedagogically valid overview or musically balanced introduction to the dizzying wonders of the classical piano repertoire.

The disappointment for teachers will be that the books contain so little of the actual core repertoire that we regularly teach, and which our students are so enthusiastic to play.

And while there will no doubt be some who snap up these books anyway because they carry the ABRSM logo, I suspect many more experienced teachers will agree that it would be a grave mistake to rely on the series for the student’s main musical diet, the “backbone of any pianist’s repertoire” that the publishers suggest.

The disappointment for students will mirror these points, but with the added problem that any who swallow the idea that the pieces included here represent the best that the classical repertoire has to offer might find themselves pretty underwhelmed.