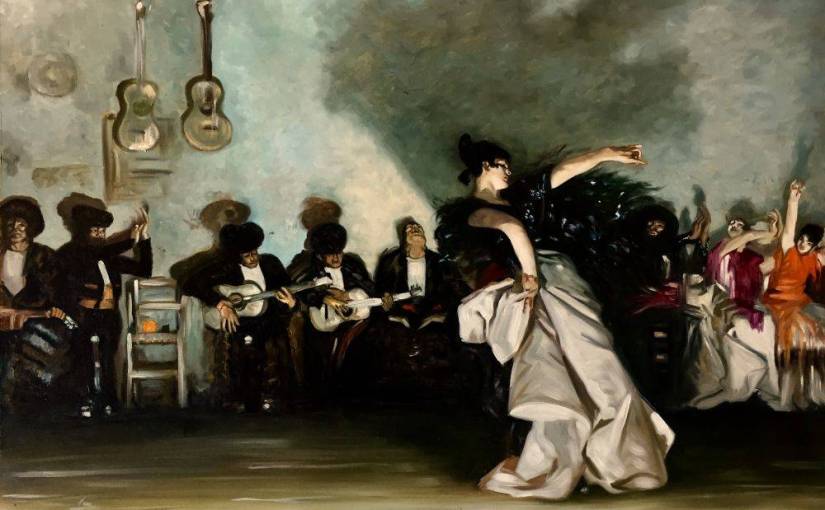 As I write this, the UK is one of many countries in the grip of a historic heat-wave. Suffice to say that when the weather here turns Mediterranean in feel, I have a tendency to uncork a fine bottle of Rioja and reach for the Albéniz CDs.

The piano music of Isaac Albéniz (1860-1909), it seems to me, occupies a uniquely odd position in the classical piano repertoire.

On the one hand he would seem to be universally admired, his monumental series of 12 piece Iberia roundly hailed as one of the seminal masterpieces at the very pinnacle of the “core repertoire” (and yet rarely performed or recorded!). On the other hand, many pianists complete their lifetime journey at the piano without once opening one of his scores.

A brand new edition of the last listed of these works has recently been issued in the Alfred Masterworks Edition library, so let’s take a closer look.

In the foreword to her new edition of Cantos de España, editor Olga Llano Kuehl-White writes:

“The music of Spanish composer Isaac Albéniz mirrors his life – both are colourful and passionate”.

Certainly, stories of the composer’s adventures are typically steeped more in anecdote than fact – stories abound that the young Albéniz was such a precocious talent that he first performed – an improvisation – at the age of four and without any musical instruction; that aged seven he was accepted for the Paris Conservatoire, only to lose his place after playing ball in a corridor; that he subsequently ran away to join the circus, proffering a vaudeville act in which he played with his knuckles, back to the piano and wrists facing upwards; that he then stowed away on a ship to the Americas, touring Cuba while barely in his teens; and that on his return to Europe he took lessons with Liszt.

Most of these legends are apocryphal concoctions, with scant relationship to the facts as we can ascertain them. In her section on Albéniz’s life, Kuehl-White paints a different picture, dispelling many of these myths and detailing the composer’s somewhat more domestic, if still exceptional, life.

The son of a customs official, Albéniz certainly displayed a phenomenal ability from a very young age. As a child prodigy he entered the Real Conservatoire in Madrid at age 8, and by the age of 12 had performed throughout Spain. The visit to the Cuba was actually accompanying his father, who was temporarily sent there on government business.

Back in Europe, Albéniz completed his musical studies while developing his career as a virtuoso pianist, visiting Leipzig, Vienna, Prague and Budapest (but not meeting Liszt, who was in Weimar at that time) before settling in Barcelona. There he married one of his students, Rosina Jordana Lagarriga, when he was 23, thereafter leaving settling down somewhat to a life of domestic bliss interspersed with regular touring.

In 1890 he moved to Brompton, England with his wife (and their now three children), before settling in Paris in 1894, where he mingled and befriended many of the greatest composers of the day, and which he made his base for the remaining 15 years of his life.

Albéniz’s early compositions were mostly in a populist “salon music” style, but by his middle period (and having fallen under the spell of the teacher and nationalist Felipe Pedrell), he began to embrace new musical influences and procedures which Pola Baytelman, in her groundbreaking biographical study, summarises as:

1. The dance rhythms of Spain, of which there are a wide variety;

2. The use of cante hondo, a serious declamatory style of flamenco or Spanish gypsy song, often dealing with themes of death, anguish, or religion.

3. The use of the exotic modal scales also associated with flamenco music, and particularly the Phrygian mode.

4. The transfer of guitar idioms into piano writing.

Albéniz’s final period – which followed a not entirely successful excursion into composing larger scale orchestral and operatic works – was dominated by his towering masterpiece Iberia – 12 colossal virtuoso piano tone poems in four books, which must rightly be regarded as one of the highest achievements in the whole of Western Music. Iberia brings together all that Albéniz had learnt and pioneered so far, combining it with the rich impressionistic harmonies and expanded form that the composer had developed during his time in Paris.

Albéniz was undoubtedly one of the greatest and most influential musicians of his generation, and his work had a profound impact on the development of Spanish music, influencing among others his younger contemporary Granados, as well as paving the way for subsequent composers such as Turina, Mompou and de Falla.

For those keen to rectify their negligence of Albéniz’s music, the revered recordings by Alicia de Larrocha provide an obvious start point for listening to and imbibing the highly distinctive characteristics of his writing. Those keen to dig deeper might enjoy exploring the ongoing complete Albéniz cycle recorded by Miguel Baselga for BIS, which have surely raised the bar and set a new benchmark for the interpretation of this extraordinary music.

The collection currently under review was first published in Barcelona in 1892, thus belonging to Albéniz’s middle period, and is made up of five miniatures:

Two of these pieces had previously appeared in the Suite Espagnole Op.47 of 1886: the Prélude here will be recognised by some as Asturias from the earlier collection, while the Seguidillas here is also a reappearance. In both cases there are changes in rhythms and dynamics – the Prélude in particular offers a minor rhythmic alteration which many players will, like me, find makes the piece more comfortable in performance.

The Cantos de España is a perfect example of the innovations of Albéniz’s middle period. Imbued with the rhythms of Spanish dance, folk-like melody and the colourful moorish inflections of Andalusian flamenco, this is music which most will immediately associate with the Spanish idiom.

The Prélude will be recognised by many, whether as a piano piece of from the famous guitar transcription, while Córdoba is also an established favourite with performers of Albéniz’s music – a piece whose gorgeous sonorities recall the music of Debussy from around the same time. Orientale showcases the exoticism of Hispano-Arab modal patterns, while Sous le palmier (Under the Palm Tree) is one of Albéniz’s many masterpieces of Romantic melody writing.

In terms of difficulty, individual movements here could be played at the upper end of ABRSM Grade 7 to Grade 8 level, while the collection as a whole would be appropriate at around first Diploma level.

Rather than offering too dry an academic commentary about the manuscripts and original sources, Alfred Masterworks Editions are aimed squarely at the practical considerations and needs of today’s performers – albeit without compromising the quality of the scholarship and music editing itself.

“The editor studied, performed and researched the repertoire with renowned pianist and Spanish-music interpreter Alicia de Larrocha (1923-2009) at the Academy Marshall in Barcelona and privately over a period of 30 years, gaining insights into the legacy of performance-practice traditions of Spanish music…”

“The editor’s main objective is to enlighten pianists in achieving an authentic and artistic interpretation, through a carefully researched edition based on a lifetime of study with the musical guidance of Alicia de Larrocha, thereby preserving the performance practice tradition of Spanish music for future pianists and fulfilling the promise this editor made to her teacher.”

As already mentioned, the Foreword includes a detailed biographical sketch of the composer. This is followed by a section covering editorial and performance considerations, which includes practical advice for interpreting the music.

There is then a five-page article about the music itself, including detailed analysis and explanation of Albéniz’s distinctive and innovative compositional procedures and how these relate to the exotic scales, rhythms and cultural characteristics of flamenco music. There is also a Glossary of Spanish Terms. All of this background information is highly useful and gives this edition excellent added value.

The editor also claims to have ”sought to fix errors found in previous editions by correcting musical inaccuracies…” – although these aren’t catalogued, it seems to me fair to assume that this edition is authoritative.

Of all Albéniz’s piano works (and there are apparently more than 250 of them!) the Cantos de España is a great collection for the player at around Grade 8 level or above.

Cantos de España can alternatively be bought in an ageing Henle Urtext edition, and the old (very basic, and not very well engraved) Unión Musical Editions publication is still around; but I would certainly recommend the new Alfred Masterworks Edition as the one to go for.