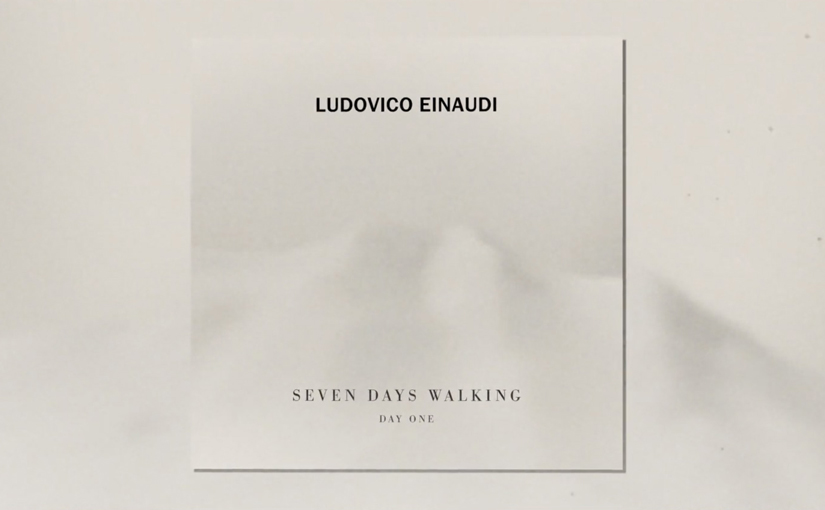 Ludovico Einaudi’s legion of fans worldwide are no doubt already enjoying his latest release; Seven Days Walking: Day One was released in mid-March, and is to be followed by six further albums, each offering fresh variants on the first, culminating in a boxed set later in the year.

Hot on its heels comes the sheet music publication of the album, brought to us by publishers Chester Music and distributed by Hal Leonard.

For more information read on…

It’s been three-and-a-half years since Einaudi’s best-selling Elements album was released, and in that time the pianist/composer has undertaken a huge world tour, as well as taking time out to recharge.

Regarding the latter, he tells us on his website,

“I remember that in January 2018 I often went for long walks in the mountains, always following more or less the same trail.
It snowed heavily, and my thoughts roamed free inside the storm, where all shapes, stripped bare by the cold, lost their contours and colours. Perhaps that feeling of extreme essence was the origin of this album.”

Whatever the origin, Seven Days Walking has certainly developed into something of an epic project, and Einaudi’s most artistically ambitious to date. His plan is to release a fresh album on streaming services every month for seven months, each telling its own story of his alpine walks.

He goes on to explain the concept in more detail:

“Each episode is focused on several main themes, which are recurring in different form: seven variations following the same imaginary itinerary. Or the same itinerary, retraced in seven different moments.
The idea first came to me as I was listening to the recordings of the first sessions: each version seemed to me to have its own personality, with subtleties so distinct from one another that I was unable to choose which I preferred.
I associated everything with walking, with the experience of following the same routes over and over, discovering new details each time. And so in the end I decided to thread them all together in a sort of musical labyrinth, a little like stepping inside the twists and turns of the creative process, to understand how a musical idea can develop in multiple directions, and changing once again at the moment in which it is heard.”

It will certainly be intriguing to find out how these seven albums vary from one another, the common threads which link them, and the artistic unity which joins them.

But for now, what of Day One?

Given that this first album represents to some extent a seed from which the others will geminate, it presents some of the main themes that provide the starting point for the journey to come (although these are perhaps not Einaudi’s first takes on those compositions).

There are eleven tracks on the recorded album, faithfully reproduced as solo piano compositions in the sheet music publication, and entitled:

On the recording, Einaudi is joined by Federico Mecozzi on Violin and Viola, and Redi Hasa on Cello, giving the compositions a chamber-music texture. The Publication rationalises the pieces as piano solos, the arrangements made by the composer himself.

Listening to the album while following these scores, they are certainly faithful to the recorded tracks, in tone as well as in content. Fans of Einaudi will surely have no difficulty hearing the album versions as they reimagine them at the piano, even though some pieces required a little more adaptation than others.

As an extra in the music book, we are given an exclusive bonus piece from Day Two called Birdsong. The recording of this is also available as a preview track on streaming services; the full album to follow shortly.

I mention this not only for the sake of giving an accurate presentation of the content of the book, but also because Birdsong is in my view among the best new pieces in the collection, and one of the more optimistic.

All that said, Seven Days Walking is on the evidence of Day One among Einaudi’s more melancholic releases.

There is perhaps a thin line between relaxation and inertia, or separating a pensive mood from a depressed one; this music treads that line somewhat precariously, and I have found that my reaction to it largely depends on my state of mind at the time.

It is perhaps Einaudi’s gift through this music to amplify what is already present in the listener’s soul.

Chester Music’s presentation of the sheet music is, in keeping with the album itself, tasteful without being flashy. The cover has a soft, matt finish, and features the same artwork as the CD/vinyl release:

Within, there’s a title page, photo and brief word from the composer, and contents list before we get straight to the music itself. The notation is beautifully presented and generously spaced across 76 pages; as in previous Einaudi scores, the trade-off is that there are multiple page turns within each piece.

In places, not least to rationalise those page turns, we are treated to images of Einaudi’s hand-written scores, which are neatly drawn and delightful to see included here.

In terms of difficulty, the pieces here are certainly no harder than Grade 5, and most are quite a lot easier, the challenges being predominantly musical.

As an example of how useful this material can genuinely be in a pedagogic context, Gravity includes a passage in which six RH semiquavers are played against four in the LH (essentially “two’s against three’s”). Players approaching this purely from the notation might find it a challenge, but for those who have immersed themselves in the album recording,“sound before symbol”, it is unlikely to prove very difficult at all, and offers a great introduction to this cross-rhythm.

Fans of Einaudi will quickly embrace this release, and it will undoubtedly be another huge hit for the composer/pianist.

Those familiar with his previous work (and aren’t we all, by now?) will find little here to surprise them. The music is easily and quickly identifiable as Einaudi’s work, a point which will reassure those who are smitten with his music as much as it will alert some others of their need to move along.

And in uncertain times, perhaps it is this accessible familiarity and wholesome sincerity which provides the key to Einaudi’s extraordinary popularity?

If there’s one thing that I’ve found, it’s that people who normally wouldn’t touch solo piano music or anything “classical” are often deeply taken with Einaudi’s pieces.

Perhaps it is their easy nature, their instinctive “pop” harmonies, or simply their emotive quality: this is music which has an uncanny ability to convert the masses to a love of the piano, and for that we should all be deeply grateful.

If you are one of the millions who enjoy this music, or a piano teacher, hesitate not: buy this new album right away.

BEFORE YOU GO…
I hope you are finding Pianodao informative and encouraging.
You can now read more than 500 FREE articles and reviews here.
Please spread the word, and support the site’s future: